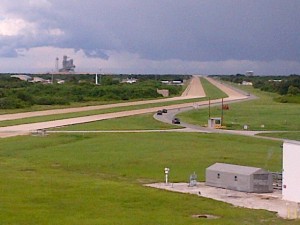 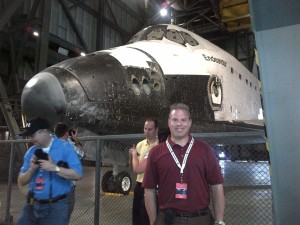 I just returned from an awesome day at NASA’s Kennedy Space Center.  It was packed with activities and gave me an even greater appreciation of everyone involved with the space program and NASA in general.  It is so crucial that we continue to fund all of the work going on there.  The following is a brief summary of the day.  More to follow.  During the morning, some of the attendees asked questions to two of the US astronauts aboard the International Space Station using a live visual and audio feed.   Currently, NASA is in a rebuilding mode.  There is a new generation of large rockets that will launch in 2017 and they need to prepare for it.  For example, the crawlers that transport the rockets are being updated so they can carry loads of eighteen million pounds as opposed to the current twelve million pounds.  These crawlers only move at two miles per hour but actually move, when loaded, under one mile per hour.  It’s a slow trek but one that must be done carefully and with precision.    We also were able to visit the Vehicle Assembly building (VAB) where the rockets are assembled before moving to the launch pads.

It’s the very familiar tall building with the NASA logo and giant American Flag on the side.  We visited the launch pad of the Radiation Belt Storm Probe (RBSP).  It will be launched at 4:07AM on Friday morning.  Above are just a few of the hundreds of photos I took during the day.  I hope you enjoy them as much I did taking them.