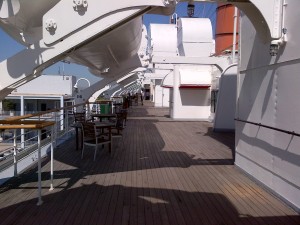 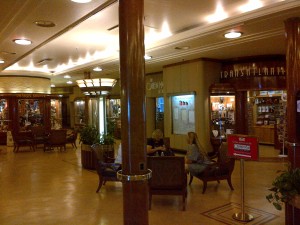 On my recent trip to California I visited the Queen Mary, something I have not done before as it seemed a little to touristy for my taste.  But since my hotel had a great view of the grand old vessel, I caved and decided to see what I’ve been missing.  As part of the Cunard Line, there are similarities in appearance to the Titanic, although the Queen Mary’s lines are much prettier.  There is much history on this ship and I ended up spending the majority of the day aboard, including lunch and afternoon cocktails.  As you step on to the ship, you are transported back to a different time, a time of grandness and workmanship.  You can envision the first class passengers strolling along the wooden decks, dressed to the nines, enjoying her beauty.  There were different woods used aboard the ship to signify all of the different English wood types and is a theme throughout the ship.  The main dining area or Grand Salon features a mural on which a crystal model tracked the ships progress.  Every inch of the ship demonstrates attention to detail.  On the tour, I was able to visit the Windsor Suite which is still available for use today, if you wish to stay aboard.  The Queen Mary is in fact, a working hotel.  All of the First Class staterooms are used for hotel guests.  Ships today, while as large or larger, simply don’t have the craftmanship and would be far too expensive to build today.  The Queen Mary also has a rich military history.  During World War II, due to her great speed, (30 knots), she was used to ferry as many as 16,000 troops on each journey.   In order for her to be ready for her military service she was painted grey, emptied of all her treasures and nicknamed the “Grey Ghost”.   After the war, she spent ten months being retrofitted to her former glory, when she would once again, ferry fortunate passengers across the pond.  Even though her maiden voyage was May 27, 1937, she would still be one of the fastest liners on the seas if she was sailing today.  Currently, there is a Princess Diana exhibit aboard the ship and while I’m no fan of the Royals, it was an excellent presentation and one I highly recommend.  Anyone who has the opportunity to visit the grand old ship should jump at the chance.  They won’t be disappointed.