Giuliani Campaigns For Romney In Ohio 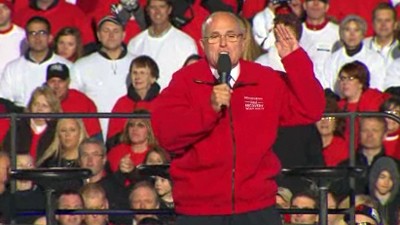 Former New York City Mayor Giuliani was in Ohio campaigning for Mitt Romney, a state he must win in order to become the next President.  If audience size is any indication, Ohio will be a very close race.  Giuliani gave an impassioned speech explaining why the President doesn’t deserve a second term.  He referred to a speech the President delivered promising to resign if he did this poorly.  I haven’t been able to locate that speech but more importantly, I don’t think the President thinks he’s done that poorly, so clearly even if he said that, he wouldn’t resign.  He clearly made promises about the deficit and he failed miserably in that instance.  Giuliani’s speech was fiery and passionate giving the sense that to him, this wasn’t just a campaign stump, he believes what he’s saying.  He genuinely dislikes this President.  At one point he says, “He lied. He has been a disaster. The worst president for our economy in our lifetime. He doesn’t want a second term. He wants a second chance, because he screwed it up the first time.”  He then went on to talk about how Obama and the Democrats have attacked Romney on Bain Capital.  On that issue he said, “They tried to humiliate him because of that. You know something, if Governor Romney can have the success for America that he had for Bain Capital, Thank God! Our people would be working again.”  The most enthusiastic applause came when Giuliani spoke about the attack on the US Consulate in Beghazi, Libya.  He said do you think if John McCain was President this would have happened?  He attacked the President stating, “Maybe if we had a president who was paying attention, we wouldn’t be going through all this investigation of what’s being covered up about Libya.  You know that what happened in Libya is the result, at least, of incompetence.”  The speech, although overly aggressive at times, was very effective and brought up Benghazi, a very touchy subject that perhaps Romney doesn’t want to discuss in great detail because of the sensitivity of the issue and the fact there is an ongoing investigation.  He appears more Presidential, as Benghazi is as much an issue of United States foreign policy as an issue about President Obama.  Whether Giuliani’s speech can help Romney in Ohio with any undecided voters remains to be seen, but it certainly lifted the spirits of supporters.