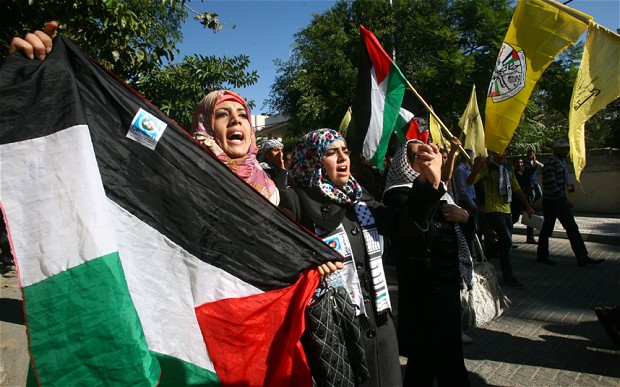 In a move criticized by the US and Israel, the United Nations has upgraded the status of the Palestinians from non-member observer entity to non-member observer state.  It’s the same status currently held by the Vatican.  The Palestinians are hoping this upgrade will help them in their negotiations with Israel, or at least afford them a greater voice in the international community.  The vote was 138 in favor, 9 against and 41 abstentions.  Mahmoud Abbas addressing the U.N. said, “We did not come here seeking to delegitimize a state established years ago, and that is Israel; rather we came to affirm the legitimacy of the state that must now achieve its independence, and that is Palestine.”  This new title, is largely symbolic, as it doesn’t address any of the legitimate issues such as settlements and the final status of Jerusalem.  In addition, the Palestinians still don’t recognize Israel’s right to exist.  If the U.N. was a legitimate body, it would have made the upgrade in status conditional based on its acceptance of Israel’s legitimacy.  And finally, Abbas only speaks for the West Bank, he has no authority over Gaza.  So essentially the entire position is flawed.  Without Gaza, there is no Palestinian state as originally recognized in the U.N. charter.  If the Palestinians, brothers and sisters with everything in common, (one people), can’t make peace amongst themselves, what are the odds they can make peace with the Israelis?  Israel is no more likely to go the negotiating table and that is the only way a real and lasting peace can be achieved.  For his part, Benjamin Netanyahu said, “Israel is prepared to live in peace with the Palestinian state, but for peace to endure, Israel’s security must be protected, the Palestinians must recognize the Jewish state and they must be prepared to end the conflict with Israel once and for all.”  And there in lies the real issue for the Israelis; an end to conflict “once and for all”.  Without a concrete and unconditional guarantee that the Palestinians recognize Israel’s right to exist, all of this is simply theater.