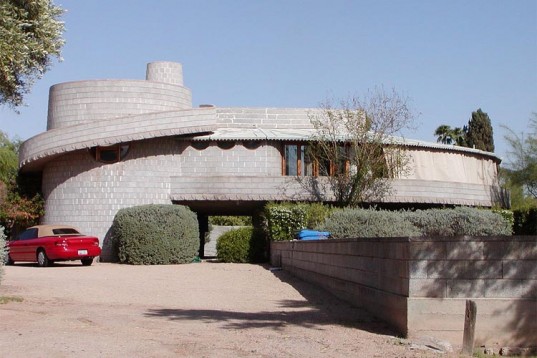 The David and Gladys Wright home, located in east Phoenix and built by Frank Lloyd Wright for his son, has been saved from demolition.  An anonymous buyer closed on the house and plans to turn it over to an Arizona non-profit that will restore and maintain the home, using it for educational purposes.  The USA Today reported, “the home was sold for $2.38 million dollars according to  real-estate agent Robert Joffe, who brokered the deal with Bob Hassett, the buyer’s agent.”  The Frank Lloyd Wright Building Conservancy, based in Chicago, has been involved in saving the home from the beginning.  According to Taz Loomans of inhabitat, the fight to save the home began when “it was purchased this summer by luxury home developer 8081|Meridian, who planned to demolish the house to build two new large houses on the site.”  When people heard of the demolition plans, the city of Phoenix, concerned citizens and local preservationists came together to save the home.  The first plan was to designate the home a landmark.  That would have saved the home for three years.  However, 8081/Meridian was of course against the designation because of its plans to demolish the home.  Now that it’s been purchased, Phoenix landmark status is all but guaranteed.  National landmark status would save the home from ever being demolished or changed without approval and should be the ultimate goal for this great example of Frank Lloyd Wright architecture.  According to Janet Hasltead, the executive director of the Frank Lloyd Wright Building Conservancy, ”more donor participation and community support will be needed to restore the house and to fully launch its new parent organization.”  Now that the house has been saved, the most difficult part of the fight is over.  Wright has a large following and many supporters.  Raising funds to restore and maintain the home will not be an issue.  Not far from the David Wright Home stands Taliesin West, Wright’s iconic home located in the mountains of Scottsdale.