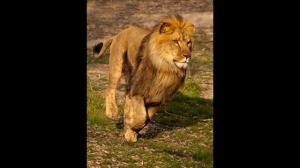 A woman mauled by lion in a natural preserve in California, has been identified as Dianna Hanson.  Hanson, a 2011 graduate of Washington University, was on a six month volunteer internship at Cat Haven in Dunlap, California; a 100-acre sanctuary run by the group Project Survival in Dunlap, about 40 miles east of Fresno. It has been closed due to this incident and will remain closed, until it’s determined why the cat attacked the woman.  I’m going to go out on a limb here and say that the lion attacked the woman because he was a lion.  Regardless of the fact he was raised in captivity, he had instincts that can not be “tamed” away.  Perhaps the large cat was just playing with her.  Lions are big, strong creatures that could kill while being affectionate.  Anyone who has every owned a house cat understands what even a little cat is capable of when frisky.  It’s unintentional of course but can leave a lasting reminder.  Big cats can be considered the sharks of dry land.  With their size, strength, speed, claws and teeth, they have earned the title, “king of the Jungle”.  Ms Hanson, on a six month internship, probably shouldn’t have been in the enclosure with the lion despite her extensive “months” of training.  It just seems like common sense.  While Her death is tragic, so is the death of the lion.  He should not have been put down for doing nothing more than acting like a lion.  One would think a natural wildlife preserve would have tranquilizer guns to subdue an animal should it escape or simply behave badly. If there is no other way to deal with an incident such as this, perhaps wildlife sanctuaries are a bad idea.  Humans can not continue to sacrifice animals because of personal stupidity and lack of understanding of what they’re dealing with.  There will always be risk when man and wild animals cross paths, even in so-called controlled environments.  Just as we shouldn’t be shocked or surprised when a “Killer Whale” drowns its trainer.  We shouldn’t be surprised when a lion mauls its trainer.  Perhaps the term trainer is incorrect.  Maybe we should refer to them as lucky.