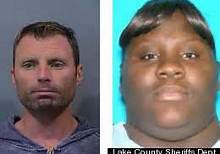 According to court documents, an Indiana woman, Natisha Hillard, has been charged in a Federal Indictment for selling her 1 1/2 year old daughter to a man she met through a dating service for child pornography.  Both she and Christopher M. Bour, 39, of Gary, are charged in the five-count grand jury indictment unsealed this week and filed Thursday in U.S. District Court in Hammond.  Hillard has been charged with selling her young daughter to Bour with knowing she “would be portrayed in a visual depiction assisting another person to engage in sexually explicit conduct.”  In addition, she has been charged with permitting the toddler to “participate in the production of child pornography.”  Bour has been charged with the production of child pornography, purchasing a child for the production of child pornography and possession of child pornography.  The indictment says Bour purchased the child to, “assist him to engage in sexually explicit conduct for the purpose of producing a visual depiction.”  This case came to light when a woman, described as a friend of Bour, filed a formal complaint against him with the FBI.  That woman’s name has not been disclosed but Bour apparently sent her explicit text messages asking whether she was interested in joining him to “watch me play with a baby tomorrow — a real one.”  In court transcripts, Bour describes his love for children and says specifically,”It’s the best sex I ever had.”  Clearly Bour is a very sick man as is Hillard.  So sick in fact that there is cure for what ails them.  In a just society, a humane society, both would be put to death.  In fact, as with rape, the mandatory punishment for child pornographers and people who have sex with children, should be death.  There is no doubt in these cases.  The authorities know they have the correct people because they always leave extensive evidence; photos, videos, computers filled with evidence.  They are obsessed, compulsive.  They can not help themselves.  All that should matter in these cases, is the protection of innocent children from sick people for who there is no hope or cure.  A mandatory sentence of death, might make at least one perpetrator think twice before becoming involved in such abhorrent behavior.  Bour and Hillard deserve cruel and unusual punishment but that’s against the law.  A lethal injection is more than humane in this case and all that follow.