While Talking Tough, North Korea Has No Intention Of Committing Suicide 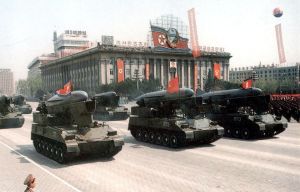 Anyone taking North Korea’s threats seriously are sadly misguided.  The North Koreans, led by baby-faced Kim Jong Un are doing nothing more than blowing off steam.  The North was obviously unhappy over joint military exercises carried out by South Korea and the US and are showing their displeasure.  The threat of nuclear force makes absolutely no sense.  So either they are huffing, puffing and bluffing, or they’re crazy.  What made the arms race between the US and Soviet Union so daunting, something to be avoided at all costs, was the concept of Mutually Assured Destruction or MAD.  You kill me, I kill you and there’s nothing left.  What’s the point of fighting if there are no spoils following the confrontation?  In this case however, North Korea is not in a position to pre-emptively strike because it would insure its destruction while leaving the majority of the enemy in tact.  Could they kill many or all of the people in the South, quite possibly.  But they can’t take out the south, Hawaii and the mainline U.S.  It simply makes no sense and although at odds with everything western, I don’t believe they want to commit suicide.  It’s far more logical that the North Koreans are playing the “negotiation through strength” card in an attempt to force the US back to the negotiating table.  In response, the free world needs to let the North speak its rhetoric while nation building against what is clearly irrational, bordering on crazy behavior.  What must now happen is China must take a lead role and put an end to the rhetoric.  Although its only ally in the region, even China has been growing impatient with the North.  As the rest of the world unifies against the North Korean threat, China will have no other course but to join the international community.  Before China was an economic power, she could afford to back the fringe and even lead the way.  But now, as part of the world economic community and second largest economy in the world, she must support stability.  Markets hate nothing more than instability.  If North Korea continues on her current course she will find herself more and more isolated and that won’t bode well for the future of Un or the North Korean people.