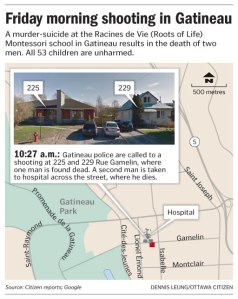 In what appears to be a murder suicide, two dead males have been removed from two separate home care centres which are next store to each other. According to the Montreal Gazette, five babies were found in one of the homes and forty-eight children, up to five years of age were found in the other.  Apparently an armed man was threatening people at the daycare facility and when police arrived, two men were shot, one was dead and the other died on the way to the hospital.  Police Chief Mario Haren said the shooting appeared to be related to the couple’s recent break-up.  “We have two deceased. One of the males is responsible for this shooting. The other male works at this day care centre,” Chief Haren said.  When notified of the shooting, terrified parents rushed to the daycare facility fearing the worst, with the Sandy Hook Elementary School shooting still fresh in everyone’s mind.  Thankfully, all of the children were safe. What this story demonstrates however, is no gun control legislation will stop a crazed person intent on murdering another person.  If the shooter in this case had decided to turn the gun on the staff and children, we would have been looking at many more deaths.  He could have easily killed all fifty-three babies and toddlers whether he had six shots or ten shots in his sidearm.  Remember, we are talking about Canada, not the US. Canadians are supposedly more “rational” when it comes to gun control and gun ownership but despite that fact, weapons are still readily available.  Crazy, unstable people will always be ready and willing to strike.  Keeping weapons out of these people’s hands is an important step as long as it doesn’t prevent law-abiding firearms owners from legally obtaining weapons. That’s one of the most contentious issues regarding gun control.  The entire issue should be focussed on stopping the bad guys.  Ninety-nine percent of legal gun owners will never shoot another human being so why isn’t this part of the discussion?  Why do we allow illegal gun violence to become intertwined with legal gun ownership.  It shouldn’t.  No gun laws are going to reduce the 500 murders in Chicago.  That’s a local issue that needs to be addressed locally, beginning with Mayor Rahm Emmanuel.  Start with implementing a stop and frisk policy like the one New York Mayor Bloomberg has implemented and continues to support.  Reduce all non-violent drug crimes to misdemeanors and lock up for life, those caught committing crimes with a firearm.  That would be an effective policy.  But with a community organizing, liberal mayor, that won’t happen.  Instead, he and others like him, will continue to target legal gun owners in order to divert the focus from their own, ineffective policies and leadership.  Finally, until all childcare facilities and schools are protected by armed guards, they will not be safe from those with nefarious intentions.