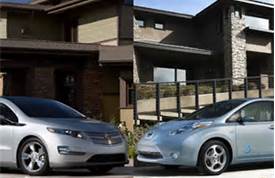 For the second consecutive month, the all-electric, Nissan Leaf has outsold the extended range, Chevrolet Volt.  In May, Nissan sold 2138 Leafs to Chevy’s 1607 Volts.  It’s becoming clear that despite its overall competence, the Volt is priced too high to be competitive with the less expensive Leaf.  Last month Nissan slashed the price by $6,000 to $28,800.  At that price, Nissan is practically giving away the car. In comparison, the Volt is priced at around $40,000.  Both cars qualify for a $7,500 federal government rebate.  In order to remain competitive, Chevrolet is going to have to cut the price of the Volt.  But as important as price, is other car manufacturers are bringing EV’s to market, like the Ford Focus electric, Toyota Prius electric and Toyota Rav 4 EV. A larger selection of choices, obviously places added pressure on the pricey Volt.  All are decent vehicles and are far less expensive. Year to date sales for the Volt is 7157, falling behind the Leaf at 7614 vehicles sold.  It remains to be seen whether GM will reduce the price of the Volt in order to remain competitive but it would mean accepting even a greater loss per vehicle.  Volt sales totaled 23,461 in 2012 while the Leaf sold less than half as many at 9,819.