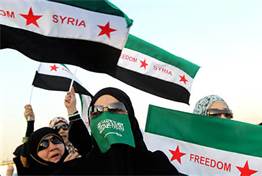 President Obama has agreed to supply military assistance to Syrian Rebels, citing Bashar al-Assad’s use of chemical weapons as the main reason for doing so.  The President is staying true to his words that the use of chemical weapons would be a “game changer”.  Spokesman Ben Rhodes, a deputy national security advisor to the President, said “the Assad regime has used chemical weapons, including the nerve agent sarin, on a small-scale against the opposition multiple times over the last year”.  Although he did not give details, he said aid would be “different in scope and scale to what we have provided before”.  It is important to note that top-level Republicans support aiding the rebels, so there is strong bi-partisan support in Congress.  In a joint statement, Republican Senators John McCain and Lindsey Graham had recently stated, “A decision to provide lethal assistance, especially ammunition and heavy weapons, to opposition forces in Syria is long overdue, and we hope the president will take this urgently needed step.”  The Russians, due to their close ties to Syria, remain unconvinced.  A senior aide to President Vladimir Putin, Yury Ushakov, told reporters that Washington had provided Moscow with its evidence, but “what was presented, does not look convincing to us”. Britain and France welcomed the action believing as the Obama now does, that chemical weapons are being used in the conflict.  A spokesperson for UN Secretary General Ban Ki-moon told the BBC that he remained against “any further militarization” of the conflict in Syria, saying “the people there need peace not more weapons.” The U.N. is once again demonstrating what a feckless organization it truly is. Syria is so far from peace at this point it’s almost silly to even discuss.  And although the people surely “need peace”, it isn’t going to happen, certainly in the short-term.  So let’s deal with the reality on the ground.  Syria, under al-Assad has shown its willingness to take whatever steps are necessary to thwart the challenge of the rebels.  Further to that, his military continues to strongly support him, so as long as that’s the case, he isn’t going anywhere.  The rebels, although clearly the underdogs, are not democratic freedom fighters seeking justice and democracy.  They are a ruthless group, supported by our enemy, al-Qaeda.  Conclusion: President Obama is making a huge mistake and should stay out of a fight that’s not ours.  If we have a problem with his use of chemical weapons, then we should take him out.  If we’re not willing to do that, and we should not, than we should stay out of it.  Although the average lay person who believes in the myth of peace and harmony for everyone will not understand this next comment, there are positive conflicts.  This is one of them.  Let the two sides fight it out and let the best or worst side, win.  They are doing our job for us; Hezbollah fighters killing al-Qaeda fighters and vice versa. From a military standpoint, what could be more perfect than that?