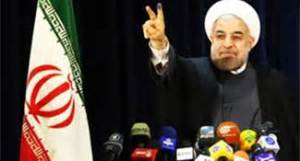 Iranians have gone to the polls and by greater than 50% of voters elected a moderate, Hassan Rouhani.  The greater than 50% margin ensures there will be no runoff election.  President Elect Rouhani said his election is, a “victory of moderation over extremism”.  Of the fifty million eligible voters, more than 72% of the electorate cast ballots.  The Supreme Leader of Iran,and the man who holds the real power, Ayatollah Ali Khamenei congratulated Mr Rouhani on his victory, saying: “I urge everyone to help the president-elect and his colleagues in the government, as he is the president of the whole nation.”  Of course the niceties will only last as long as Rouhani stays in line with the religious hardliners.  But even though his actual power will be controlled and limited, he is in a position to make real change in a country that has been ruled and controlled by autocratic rule since the revolution in 1979.  Joyous and celebratory crowds gathered outside Rouhani’s headquarters and chanted, “Long live reform, long live Rohani,” chanted the throngs, according to witnesses at the scene. “Ahmadi, bye-bye,” referring to outgoing President Mahmoud Ahmadinejad. In his two terms as President, Ahmadinejad managed to get on the bad sides of both reformists and religious clerics.  While no one in the west expects quick change, Rouhani is a moderate compared to the man he succeeds.  Rouhani, is a former chief nuclear negotiator who appears to want closer more open ties with the west but no one should be under the illusion his is going to cave in to sanctions.  Iran will continue with its nuclear ambitions although the tone may change.  He has discussed implementing a “civil charter” guaranteeing certain domestic rights and “constructive interaction with the world”.  Reformers in Iran are acutely aware that unemployment rates of higher than 14% aren’t sustainable and much work needs to be done repairing Iran’s infrastructure.  British Foreign Secretary, Jack Straw called Rouhani a,”very experienced diplomat and politician”.  He continued,”What this huge vote of confidence in Doctor Rohani appears to show is a hunger by the Iranian people to break away from the arid and self-defeating approach of the past and for more constructive relations with the West.”  While the people of Iran have spoken loudly and clearly and while there is new sense of optimism, only time will tell if things actually change for the better.  But being very clear, one would have to be a blind optimist to believe that any substantive change is coming.  Despotic, autocratic, dictatorships, rarely give in to the will of the people.