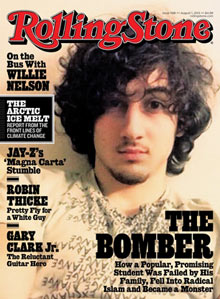 Rolling Stone Magazine, published by Wenner Media, has caused a huge controversy with its August cover.  It has been called everything from insensitive to cruel and evil.  But is the cover really that over the top?  Is it the pinnacle of bad taste?  Not necessarily.  As a member of the magazine industry, I’m never shocked by a cover, not even the cover of a boy old enough to drive, breast-feeding from his mother as if she’s a milk fountain.  Because as any seasoned magazine publisher will tell you, covers sell magazines.  But as important, they get people to pick up the magazine. They start discussions, even if we disagree.  Perhaps this cover is particularly insensitive but it’s news and Rolling Stone has the right to publish it.  The last thing anyone in this country should want is censorship.  Of greater relevance than the cover, is the magazine’s content.  If the editorial is top-notch and the story has validity, why condemn the entire magazine?  Dzhokhar Tsarnaev is a murderer and the most hated man in America.  The cover will not change that.  He is not, as many people are saying, being glamorized.  Rolling Stone is not attempting to make him a rock star. Those are simply interpretations of the media being fed to the public via the internet.  The families affected directly by the tragedy have a far different perspective and the pain of seeing that monster on the cover is certainly understandable. He will stand trial and ultimately spend the rest of his life in prison.  But agree with it or not, he and his story, is news; far more newsworthy than all of the trashy reality television.  Far more important that Kim Kardashian.  Every American should stand behind Rolling Stone’s right to print and report this story.  If the press shied away from every story and photo that offended someone, despite it’s message and image, we would be a country of self-censors and that would be tragic.  Instead of stores refusing to carry the issue, every American should stare him in the eyes and say “you lose”.  You may have killed and injured scores of Americans, but you in no way made even the slightest dent in our Democracy.  That is how we fight these monsters, not by condemning and censoring Rolling Stone.