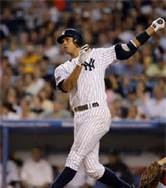 Despite the fact Alex Rodriquez will never want for money or fame, the story of Alex Rodriguez is a highly disappointing tale.  He is the Lance Armstrong of baseball.  He’s probably one of the most talented men who has ever walked between the lines of chalk; to play the position of third base, or to hit a baseball.  He’s everything a team would want and expect its franchise player to be; charming, intelligent, a leader and most importantly, talented.  He is one of those athletes, few and far between, who are gifted by God.  They include names like Willie Mays, Wayne Gretzky, Michael Jordan, Muhammad Ali, Sugar Ray Leonard and Secretariat.  They are not just great athletes, they possess something extra special, something that sets them apart from all other great athletes.  For example, Sugar Ray Leonard, after losing to the “Hands of Stone”, Roberto Duran, was able to come back and essentially cause him to quit in his corner.  Duran is one of the toughest men on the planet and Leonard essentially humiliated him into quitting, simply by his greatness.  Muhammad Ali was able to regain the Heavyweight crown after being singled out for his religious beliefs.  He took back what was rightfully his. And Secretariat ran a time at the Belmont Stakes that will never be broken.  A time that is essentially impossible to run.  He broke that record despite being unchallenged in the last furlongs of the race.  He won because he was special and had God-given talent. The other night at Fenway Park, Alex Rodriquez proved his greatness.  Despite being thrown at by Red Sox pitcher Ryan Dempster and eventually being hit on the elbow, he retaliated in the only way God-given talent can retaliate, by crushing a long home run leading off the sixth inning, to dead center field.  And therein lies the tragedy.  Alex Rodriquez would have been a great baseball player without steroids. He would have been a hall of famer.  He didn’t need to cheat, to win.  And now, despite his 500+ homeruns, he will never make it in to Cooperstown.  He will never take his rightful place in baseball immortality.  His name will forever be associated with everything that is wrong with sports.   A-Rod will finish out the season and then his suspension will begin following his appeal loss.  His tainted but spectacular career will be over.