Obamacare: What We Don’t Know Can Hurt Us 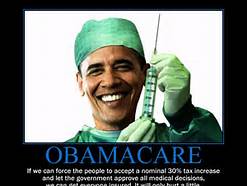 What is the greatest, single issue concerning Tuesday’s open enrollment for Obamacare?  Answer: The uncertainty.  Never in the history of these United States has such historic legislation been less understood than with President Obama’s landmark achievement.  How much will it cost to belong to a health exchange?  What will the coverage include?  Will jobs be lost since employers with 60 employees might opt to lay off 11 simply to fall below the employer mandate of 50 or more employees?  Will larger companies opt out and elect to pay the fines because it will be far less expensive than to offer insurance?  Will it raise or lower the deficit?  What we don’t know, can hurt us.

The fact is, Obamacare is a mess.  No one can dispute that and even those in favor of it and those who pushed for it are now admitting as much.  It’s such a huge piece of legislation that, quite frankly, it’s impossible to know what’s going to happen until it does.  One thing we are sure of is that those not currently insured will be able to purchase insurance.  And if those opting in are earning some percentage of the poverty level, they will be eligible for government assistance.  However, fines will be imposed, although small at first, if individuals or families choose not to participate.  Also, for an estimated 14 million Americans, their health insurance costs will actually go up.  Bill Maher addressed this on Real Time and basically said, “well, you have to take the good with the bad.”  Easy to say if you’re a ridiculously wealthy talk show host without a stake in the system.  However, to a family of four earning $80,000 per year with a mortgage and car payment, it might send them in to financial collapse.  The average cost of family healthcare through a health exchange could reach $1,500 per month and that is not for the highest level of care.  Do most Americans really have an extra $18,000 to throw away on healthcare.  This is no scare tactic, simply a fact.

To all those who consider healthcare to be some incredible benefit that puts a smile on your face.  In truth, health insurance should be called sick insurance.  You’re covered in case you become sick.  If you’re healthy, you don’t need or use it.  It’s no different than life insurance.  Life insurance should be referred to as death insurance since you only collect if you die.  These are not benefits they are necessities to protect you and the ones you love.  So lets stop celebrating something that really does nothing for us unless we are in the worst possible situation; cancer, heart disease, stroke etc.  Too many Americans waste our valuable resources going to a doctor or hospital for a cold or fever.  Do we really need a doctor to say take two aspirin and call me in the morning?  But for some reason we are a nation of hypochondriacs or cry babies requiring attention, take your pick.  If we eliminated patients who visit doctors for silly ailments, healthcare costs would drop significantly.

Finally, when President Obama, Nancy Pelosi and Harry Reid tackled healthcare, they said they were doing what was best for the country.  But 80% of Americans were already insured when the Affordable Care Act was passed.  It was marched through Congress the way the bulls march through the streets of Pamplona, without bi-partisan support and no one had the chance to read or understand it.  Sometimes it’s not better to act than to act without understanding all the possible ramifications.  Should this turn in to a major fiasco, the Democrats will have to answer for it.  Should it turn out to be like Social Security, an important, necessary program, the President and his party will look like rock stars.  The problem is, we have no idea what the final result will be.