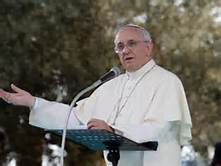 Pope Francis, in his first major published writing (“The Joy of the Gospel”) since becoming Pope and reiterated in a speech in the Sardinian Capital of Cagliari, referred to unfettered Capitalism as a “New Tyranny”.  “Where there is no work, there is no dignity.” He want on to say that, “This is not just a problem of Sardinia; it is not just a problem of Italy or of some countries in Europe, it is the consequence of a global choice, an economic system which leads to this tragedy; an economic system which has at its center an idol called money.” He called on rich people to share their wealth. “Just as the commandment ‘Thou shalt not kill’ sets a clear limit in order to safeguard the value of human life, today we also have to say ‘thou shalt not’ to an economy of exclusion and inequality. Such an economy kills.” Pope Francis spoke of the most vulnerable of our society being “marginalized”  They are being left behind,  “We want a fair system; a system that allows everyone to move forward.’ We must say: ‘We do not want this globalised economic system that does so much harm.  At the center has to be man and woman, as God wants, not money.”  The time to which this 76-year-old Pope refers, predates Capitalism; when the Church was the center of civilization, owned all the wealth and controlled everything.  The “Good Ole Days”.

While there is some validity to what Pope Francis wrote and spoke about, without Capitalism, the world would be back in the dark ages.  It is far from perfect and there are those who are greedy.  But not every Priest is a child molester, and not every Capitalist is greedy.  Bill Gates comes to mind.  In fact, Americans are the most charitable people on earth.  Whenever there is a tragedy such as Hurricane Sandy or the more recent Typhoon in the Philippines, Americans open their hearts and the wallets and give generously.  To condemn the only economic system that has given the world opportunity, is both flawed and shortsighted.  Unfortunately, due to his place in the religious world order, he is unable to see that much of the problem relates to underdevelopment as a result of over population; something he and the Catholic religion foster with its strict policy on birth control and abortion.  I wrote a paper by that same name when I was in graduate school almost 25-years ago and it still applies today.

Finally, there is one, single most important factor regarding Capitalism that the Pope fails to understand, the fact that Capitalism drives ingenuity and equates to freedom.  Where there is no freedom, there is no capitalism.  I for one prefer unfettered capitalism to government controlled totalitarianism.  Just as you can’t dictate or legislate kindness, you can’t dictate how people choose to use their economic resources.  For example, the Catholic Church is the wealthiest corporation on the face of the earth.  Far wealthier than Apple, IBM and Microsoft combined.  Yet we don’t see the Church selling any of its real estate holdings, or its vast collection of Art and Jewels.  Pope Francis and the Catholic Church are hypocrites, spewing words that may in fact hold some validity but aren’t practiced, merely preached.  This is not a criticism of Pope Francis.  On the contrary, he appears to be the most enlightened Pope, perhaps in the history of the Church, but he represents an organization that is as greedy and flawed, as the unfettered Capitalists to which he refers.