Go Set A Watchman: A Must Read 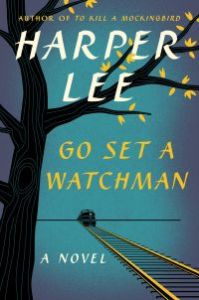 I just finished reading Go Set A Watchman and it was not only far better than what I expected, having read some of the critiques, it was truly thought-provoking.  Having read To Kill A Mockingbird 6 times, I was convinced that Watchman could not top Mockingbird, and it didn’t.  To Kill A Mockingbird is one of the most important books ever written, certainly by an American author..  However, it’s important not to compare both works.  For those who have not read Watchman, I will not give away any of the important details; at least those not already released.

While Watchman takes place when Jean Louise (Scout) Finch returns to Maycomb at the age of 26, it’s widely known at this point, that it was written three years prior to Mockingbird. However, her editor at the time suggested that she not publish it and instead write first about a young Scout and Atticus Finch.  Why it took more than five decades to publish this novel is anyone’s guess and perhaps Harper Lee is the only person who really knows the answer but as I read it, I certainly had my suspicions.

First let’s discuss the book itself.  We learn early on that her brother Jem has passed away.  This was a major disappointment to many fans of Mockingbird but it shouldn’t be.  It works in this story.  One should not look at this as the sequel of Mockingbird but rather read it on its own merits.  While the main characters are the same, we learn many new things about them.  We certainly learn all about Scout as a twenty-six year old woman.  She is living in New York having left the comfort of her small town surroundings.

There are several flashbacks to her childhood as she is clearly torn between who she is and where she comes from.  We learn about her father Atticus and how that affects her life and her views on the world.  An older and feeble Atticus is not, despite when has been written, the antithesis of Atticus from Mockingbird.  We learn much about her uncle, Dr. Jack Finch (Atticus’ brother).  Her Aunty Alexandra, Atticus’ sister is also a key figure in her life. Hank, childhood friend of Jem’s and now her love interest is trying desperately to win her hand and yet she has serious reservations.  Calpurnia, the Finch’s live in caretaker and surrogate mother to Scout, proves to be an important character in the story.

While all of these relationships are keys to understanding Scout’s life and Maycomb, by far the most important part of this story is its historical context.  What’s happened and is happening in the south at the time the story is penned by Lee is history changing.  Desegregation, Brown vs. the Board of Ed.  Separate is NOT Equal!.  Lee provides an absolutely brilliant perspective on what changes the south is undergoing and why it’s so resistant to change above and beyond desegregation.  She gives the reader a real insight into the mentality of the average southerner.  The last third of the book is riveting.  It’s nothing short of brilliant.

It’s also why I believe this story wasn’t published at the time.  It would not have been favorably received, (put kindly) by southerners.  It’s direct, truthful and hard-hitting, pure genius in its literary style.  The final third of the book doesn’t allow the reader to put it down.  It grabs you in and keeps you hungry for what’s next.  What is it that Scout’s searching for?  Will she be able to come to terms with the realities of her life, her misconceptions and her belief in the goodness of man?  Particularly the man most close to her, her hero.  But anyone who appreciates the truth and someone who lays it on the line in the search for truth and justice will appreciate this novel.

Go Set A Watchman: A must read!