Tesla Model 3: Worth The Wait? 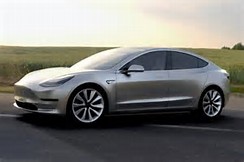 Let me start by stating that I believe EVs are the future of automobiles despite my love for the combustion engine. I owned number 1271 Chevrolet Volt before it was cool.  Chevrolet did a great job of courting early adopters, hosting a breakfast at the Water club in New York City, which I attended.  It was one of the best decisions of a car purchase I ever made, as it took me through all of the miserable weeks of gas lines, following hurricane Sandy.  I was able to make it to Manhattan and back and JFK and back, without using any gas. I would smile as I drove past the 4 hour and longer gas lines,  Every night I charged my car, and would be ready for the 40 to 45 miles of driving that was the norm each day.  The Chevrolet Volt, even though not the most luxurious or fanciest cars I ever owned, is still one of my favorites.

Let me also state that I have no expertise in cars other than passion and having owned 45 cars which is almost a car a year. So I’ve driven many cars, American, Japanese, German, British, Italian and Swedish.  Not as many as Jay Leno but certainly more than the average person.  This brings me to the new Tesla 3.  While I was not at the introduction of the Model 3, there are some obvious observations.

Elon Musk claims that everyone is going to love the sparse interior, I totally disagree.  What makes a beautiful interior, is the functionality and convenience of all of the instruments.  In the case of the Tesla Model 3, we now know that there is only a 15″ screen in the center of the console that essentially operates everything.  While that in and of itself is not an issue, having to take your eyes off the road every time you want to change a setting, is. There’s a reason why car manufacturers don’t allow drivers to operate the navigation system while driving.

The thought behind the sparse interior is obviously a view forward, when the car is totally autonomous.  But the facts remain, a) total autonomy is still years away, b) it’s less expensive and c) easier to build than a more complicated interior.  The issue I have is that the interior gives a car its character.  The Tesla 3 therefore, lacks character. It’s like getting dressed without adding any accessories, a watch, a bracelet, a scarf, whatever it is that one wears to accentuate their outfit. It also removes some of the passion of driving.  Let’s face it, if autonomy becomes the norm in the distant future, the passion for driving is over.

There is one other very important fact that can not be overstated.  This new Tesla can travel 300 miles on a single charge but that’s only with the optional $9,000 battery.  That option alone, takes the car to $44,000.  Affordable for Musk but not for the average consumer.  I found it amusing that he said the intention was always to bring Tesla to the average car buyer,  But given all of the options, this car is hardly affordable to the average car buyer.  It will be interesting to see how many of the 500,000 of those who pre-ordered the car drop out when they realize the $35,000 is for the entry-level, no options version of the car.

The Tesla Model S and X are great automobiles.  But at the $100k+ price tag, they should be great cars.  The jury on the Model 3 is still out.  While it’s hyped as an affordable EV in the bare bones version, when adding options it becomes unaffordable to the average car buyer.  I have tremendous respect for Elon Musk.  How could anyone not?  But I also believe he tends to be unrealistic, which may be his undoing  He must at some point answer some vital questions.  Can Tesla really produce enough cars to deliver to anyone who wants to purchase one?  Can he at last turn a profit?  Tesla bleeds money and without the $7,500 federal tax credit, the 3 would probably not be viable at all.  There is only so long that any company can exist without showing some promise of a future profit, or even a break even.  For now though, stock investors will continue to gamble on Musk and his money losing car company.  Will the 3 be the vehicle that turns it around for Tesla?  Only time will tell.