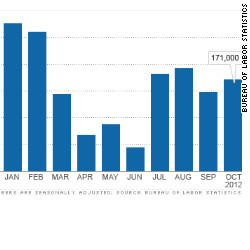 The just released jobs report tells two different stories depending on where you stand and which candidate you support.  President Obama’s camp would say yes, the unemployment rate worsened by 0.1% in October but that’s because people are more hopeful and have started looking for jobs after sitting on the sidelines.  In addition, 171,000 new jobs is a solid number; people finding jobs in healthcare, retail, business services and professional positions.  Finally, the number of jobs created beat most estimates.  In the Romney camp, they would say the unemployment rate is still far too high at 7.9% and the jobs that are being created are lower paying and many part-time positions.  The fact that more people are attempting to look for work is a good thing but this President’s policies have caused them to sit on the sidelines for too long because of a lack of hope.  To a certain extent, both camps would be correct.  The fact is, the economy is showing slow growth consistent with a 2.0 increase in the GDP.  However, at 7.9% and the very real threat of tax increases forthcoming when the Bush tax cuts expire, the economy could very well stall.  One thing this President, the great communicator has been unable to do, is reach across the aisle.  Blaming the Republicans is a childish argument and solves nothing.  Yes the Republicans have been unreasonable at times, but a different leader would have better success.  It’s great that he wanted to bring change to Washington but if that change means the only way to get anything accomplished is through loopholes or executive orders, that’s a real issue.  Should President Obama be re-elected, the economy will fall back in to a recession.  President Obama doesn’t have the tough and necessary skills to negotiate with the Republicans.  It’s just not in his background or makeup.  When things get difficult, he either apologizes or finds a way to skirt the issue.  Never has he hit a topic head on and fought tooth and nail to a positive conclusion.  You can’t teach that and you certainly can’t learn it on the job as his first term has clearly demonstrated.  If he is re-elected, regardless of what any financial groups say, the Affordable Care Act will not only increase the budget deficit, especially if the economy remains lackluster, but put us back in to a serious recession that will be difficult to climb out of.  A word to the wise.