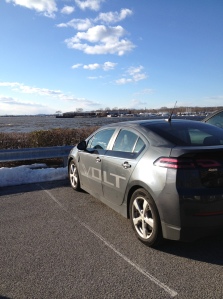 After a dismal start to 2013, Chevrolet Volt sales jumped 40% in February to 1626 vehicles sold versus 1140 sold in January.  February’s sales were up almost 60% over February 2012.  Fortunately, the dismal January results for the Volt were due to an extended holiday shutdown in December which resulted in a shortage of vehicles, particularly on the west coast.  One way to drive demand is by controlling supply which appears to have paid dividends in February and probably for the remainder of the year.  Sources inside GM said this week that “the company plans on selling 36,000 Volt-based vehicles worldwide in 2013”. GM has now ramped up their Hamtramck facility production facility  and turned out almost 3,000 units (2,949) in January and another 3,298 in February, meaning it will not be able use a car shortage as an excuse slow sales going forward.  Year 2013 will be a possible make or break year for the Volt as it must prove it’s ability to appeal to the mass market and grow sales. Long time competitor of the Volt, the Nissan Leaf, had dismal results in January, selling only 653 leafs, which was a slight improvement over January’s result.  Again however, there was a shortage of Leaf’s available which hurt results. Sales should improve as inventories increase.  With new plug-ins arriving, meaning increased competition, it will be an interesting and possibly, a breakout year for the EV market.