Ahmadinejad In Hot Water At Home Due To Scandalous Photo 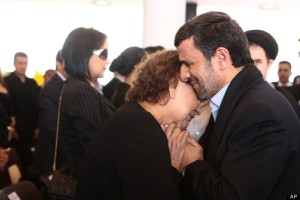 Iranian President Mahmoud Ahmadinejad is in all kinds of trouble over a scandalous photograph of him hugging and cheek to cheek with the widow of Hugo Chavez.  Strict Islamic law forbids men and women from physical contact unless married, related, or in need of medical treatment.  Others would include a fireman saving a woman from a blazing inferno or a man saving a woman from drowning.  But what Ahmadinejad did is a sin against strict Islamic law.  It just isn’t done and it puts a greater strain on an already strained relationship.  In Iran, the Supreme leader or ayatollah holds the ultimate power in the country.  The President is merely a figurehead.  The response to the photo in Tehran, which went viral on Twitter, was swift and pointed.  “In relation to what is allowed (halal) and what is forbidden (haram) we know that no unrelated women can be touched unless she is drowning at sea or needs (medical) treatment,” said Hojat al-Islam Hossein Ibrahimi, member of the Society of Militant Clergy of Tehran, according to the Iran Pulse report.  Ahmadinejad was already under fire for the eulogy he gave, associating Chavez with Jesus Christ and a second coming. According to Al-Arabiya Mohammed Dehghan, a member of the Iranian parliament, called for religious scholars to confront Ahmadinejad’s “un-Islamic” acts.  Some Shite religious figures urged him not to make any more religious references while others said he should learn more about his religion.  Of course since he is such a detestable figure, it’s not unenjoyable watching him face the heat at home.  But it also points to what a backwards country Iran remains.  While no fan of either Chavez or the Iranian President, his apparently heartfelt gesture, was one that most civilized human beings would think appropriate.  But when dealing primitive beings, set on living in primitive times, little can be expected in terms of civility.  One fact about human nature regarding evil men, given the lack of a common enemy, they will lash out at each other.  It’s almost a certainty that the Iranian President’s next speech will concern Israel.