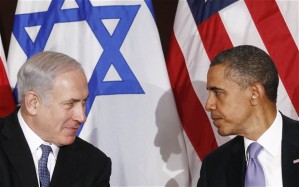 In an attempt to thaw cool relations with Turkey ever since Israel killed eight Turks and one American of Turkish descent on a flotilla heading for the Gaza Strip, Prime Minister Benjamin Netanyahu called Turkish Foreign Minister Recep Tayyip Erdogan and apologized.  He did so while sitting with U.S. President Barack Obama in a trailer on a Tel Aviv airport tarmac. According to the Foreign Minister, the call lasted for thirty minutes during which Netanyahu acknowledged “operational mistakes”.  The Israeli Government said, “(Netanyahu) made it clear that the tragic results regarding the Mavi Marmara were unintentional and that Israel expresses regret over injuries and loss of life.”  Erdogan accepted the apology.  It’s unclear what the apology will mean in the short-term for Israeli-Turkish relations but it was the correct decision.  Turkey and Israel have shared a close relationship over the years, regarding trade and military cooperation.  Last Thursday, President Obama said he talked with Netanyahu about his reaching out to Erdogan, “and both of us agreed that the moment was right.”  At one point, Obama got on the call between Netanyahu and Erdogan, said two senior administration officials who described the call as “an important step” in normalizing Turkish-Israeli ties.  In their conversation according to CNN, Erdogan told Netanyahu that he thought the deterioration of ties between the countries was regrettable, especially given “the shared history and centuries old ties of strong friendship and cooperation between the Jewish and Turkish peoples.”  However, not everyone is as quick to forgive and forget. Palestinian activist Hanin Zoabi, who was part of the flotilla heading for Gaza and is also a Palestinian member of Israel’s parliament, said she does not accept Netanyahu’s apology. She wants an international court to try the people “involved in the political decision that gave a green light to kill the political activists on the Marmara.”  This thawing of relations is bad for both Syria and Iran who have poor relations with both the Turks and Israeli’s.  It was a very intelligent and strategically important move by Netanyahu and an important foreign policy victory for President Obama.