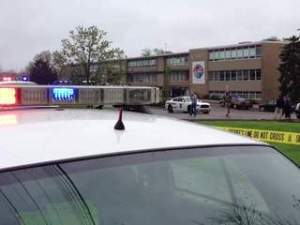 An Ohio High school teenager attempted to commit suicide in his high school, causing it to be locked down.  The name of the student has not been released at the request of his parents.  He attends La Salle, which is an all male Catholic high school.  In the incident, which occurred just after 9:00 AM, Monday, the student pulled out a semi-automatic handgun and shot himself in front of twenty-two of his classmates. Greg Tankersley, La Salle’s Director of Community Development, told reporters the “student is fighting for his life”.  According to Tankersley, he is an honors student who has completed more than eighty hours of community service and is working to become an Eagle Scout.  His parents released the following statement, “We thank all of you for your thoughts and prayers. We ask that the media please respect our privacy at this time so we can do what we need to do for our son and our family. We also ask that friends of our son and family please refrain from Facebook and Twitter comments. We appreciate the heroic efforts of UC Medical Center staff as they care for our son.”  Of course there are many questions that need answering.  Why did he want to take his life?  Why did he choose to do it in school, in front of his classmates?  He could have shot anyone in the classroom with whom he held a grudge, why didn’t he?  But the larger question that must be answered is why most students are able to get through those miserable teenage years, while other feels there’s no other alternative but suicide?  Without discussing statistics, it just seems as if more teens are attempting to end their lives than ever before.  Are the drugs we’re putting in to our kids from an early age to control so-called disorders like ADHD, causing them to be depressed and hopeless?  The over diagnosis of ADHD is causing parents to agree to treatments because they can’t cope. We have allowed the drug companies to make our kids drug addicts from an early age and that must be examined. Is there a correlation between fewer parents at home monitoring their kids and suicide?   Perhaps there are other factors.  But one thing is certain, teenagers weren’t more kind and life wasn’t easier thirty-five years ago.  If anything, kids were more abusive and bullying wasn’t cyber in nature, it was punching in the face, knocking out teeth in nature.  Perhaps we have made our children too soft and killed their coping mechanisms.  Whatever the case, the solution begins at home.  Parents must do a better job of monitoring their kids, of speaking to them. Happy, well-adjusted teens don’t just wake up one day and decide to end their lives.  There are always signs, even if subtle.  Let this horrible story act as a wake-up call to all parents of teens who may be acting strangely or who’s normal or usual behaviors have changed.  It may be a sign something is seriously wrong.