Another Rape Of A Young Girl In India: This Victim Succumbs To Injuries

By CJujitsu May 1, 2013 International News 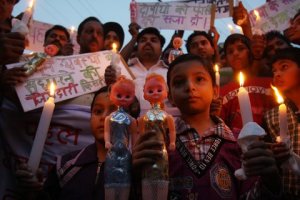 Yet another act of depravity from the country of India.  There appears to be a rape epidemic taking place and not enough is being done to curb the violence of those most vulnerable.  In this case, a four-year old girl was kidnapped from her home, raped and left to die in a field.  One day after the attack, which occurred on April 17, her parents found her and rushed her to the hospital.  She had been on life support until yesterday when she suffered cardiac arrest and succumbed to her injuries.  A thirty-five year old man was arrested and charged with sexually assaulting the girl.  With her death, murder will undoubtedly be added to the charge.  Police say suspect Firoz Khan, has confessed to the assault.  In response to the girl’s death, one of her relatives, Aalok Vajpayee said, “We hope from the administration, the police and the court that a fast-track court will hear the case and that the accused will be given the death sentence.”  His call for justice is absolutely on target.  This person needs to be made an example of what will happen if grown men continue to rape young girls, babies really.  But it must also serve as an example that women are not second class citizens and the rape and murder of any girl or woman will result in a death sentence if convicted.  Rape and rape of young girls is an all too common practice in India.  According to CNN which cited a recent report from the Asian Center For Human Rights, there were ” 48,338 child rape cases reported in India between 2001 and 2011.”  And that doesn’t account for the number of rape cases that were not reported.  Rape is still considered shameful for the victim often being ostracized for being a victim.  With all of the negative world-wide media India has been receiving, one can only hope change is coming.  The only way to ensure that, is to punish perpetrators severely and to drive an all out effort to change the attitudes and culture of a country that has for too long accepted such heinous behavior.