America’s Cup Has Lost Its Focus And True Meaning: To Determine Who Are The Best Sailors 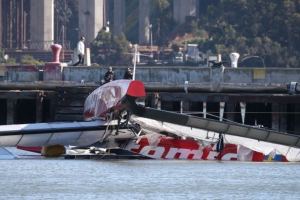 The America’s Cup Sailboat Race dates back to 1851 when the newly established New York Yacht club was challenged to a sailboat race in England, by the Royal Yacht Squadron.  At the time, the Royal Yacht Squadron was the most prestigious yacht club in the world.  The Yacht America was chosen to race in the “All Nations Race” that took place between the Isle of Wright and Great Britain.  Although, the yacht America crossed the starting line last, she won the 74 mile race by more than nineteen minutes, beating out all fifteen of her British competitors.  The prize for the winning the race was the 100 Guineas Cup, an award commemorating Queen Victoria’s Jubilee year.  The Americans brought the cup back to the US and renamed it the America’s Cup, after the winning boat.  The Americans successfully defended the trophy for 132 years before Australia II won the cup in 1983.  Fast forward to this past week when English Olympic sailing gold medalist and Artemis strategist, Andrew “Bart” Simpson, lost his life after his 72 foot catamaran capsized, trapping him underwater for ten minutes.  Efforts to revive him were unsuccessful.  These America’s Cup catamarans can achieve speeds of forty knots.  According to sources, winds were blowing between fifteen and twenty knots when the boat essentially went stern over bow.  A fifteen to twenty knot wind is hardly a gale and certainly shouldn’t be capable of capsizing a 72 foot vessel.  There was something unquestionably flawed about the design.  Having said that, there is something flawed about the entire modern era of the America’s Cup.  Years ago, when the Cup was essentially a one design race, J-Class then 12M yachts, it was about who were the best sailors.  Twelve meter yachts were raced from 1958 through 1987 and were beautiful and majestic with no one team having a technological advantage.  Yes each country built its own vessels, but there were strict guidelines that made the vessels very comparable when it came to boat speed.  Ultimately, the best sailors won.  It just so happened that until 1983, the Americans were the best sailors (home water advantage helped).  That is, until the Australians changed the rules of the game with a winged keel.  So secretive was this new design, that they kept the keel covered when the boat was out of the water.  It gave the Australians a distinct advantage in boat speed.  The extra keel depth when heeling, kept it more stable and the boat at its maximum heel angle, therefore maximum boat speed.  I refer to it as cheating.  If you can’t beat your opponent head to head, find another way; they did.  When I was young and raced Lasers and Hobie Cats, you knew the best sailors because the boats were identical in every way.  Put each team in to identical vessels and let the best team win.  But of course, in these times, it has become less about skill and more about winning.  Winning is everything.  But while it’s great to win,  it’s even more satisfying to win without relying on better technology.  In addition, the main goal is to increase visibility for the sport; to make it more fan friendly.  The only way to do that, is to make these boats incredibly fast and therefore more dangerous.  There was a recent article in Sail Magazine that stated a sailor would have to die before addressing the dangers of these rigid sailed catamarans.  Unfortunately, it appears the author was correct.