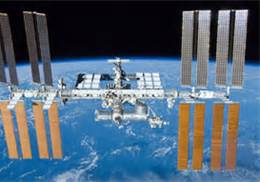 The International Space Station had been leaking ammonia in to space, resulting in the need for an emergency spacewalk and repair. Ammonia is used in the cooling system of the ISS.  Chris Cassidy and Tom Marshburn, the two American astronauts currently aboard the ISS, made the emergency spacewalk and noticed ammonia drifting away from the station.  Although the crew was never in any danger, NASA decided to fix the problem prior to Marshburn returning to earth next week.  According to the NASA website ,”Liquid ammonia is used to extract the heat that builds up in electronic systems, dumping that excess energy to space through an array of radiators.”  It continues,”The leak was coming from the station’s port side, at the far end of the backbone, or truss, structure that holds one of the laboratory’s huge sets of solar arrays.”  All told, the astronauts were outside the station for 4 1/2 hours, completing the repair one full hour ahead of schedule.  During that time they replaced a pump and reported “No Leaks”.  However, long-term monitoring of the new pump will be required in order to determine whether the leak has actually been repaired.  The spot of the leak was in the very same location of one that occurred in 2007.  Repair work on that leak was completed in 2012.