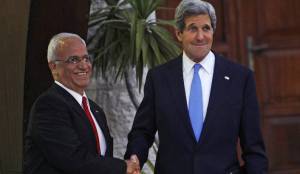 In an annual report covering the year 2012 on religious intolerance around the world, the U.S. State Department voiced concern over what it called, ” a rising tide of both anti-Muslim and anti-Jewish sentiment around the world.”  The State Department report which covers 2012, specifically addressed, “China, Iran, Myanmar, North Korea and Saudi Arabia,” as demonstrating religious intolerance.  It continues that “anti-Semitism was rising in the media in both Egypt and Venezuela” and that “Anti-Muslim rhetoric and actions were clearly on the rise — particularly in Europe and Asia.” The report also said that Muslims faced new restrictions in 2012 in countries ranging from Belgium, “which banned face-covering and religious attire in classrooms”, to India where “schools in Mangalore restricted headscarves.”  The report attempts to bring to light growing religious hatred but is completely flawed in the way it lumps two religions in to one pot. One can not compare Judaism and Islam in terms of religious intolerance.  There are 1.6 BILLION Muslims in the world.  There are 14 MILLION Jews. In numerical terms that’s 1,600,000,000 or 23% of the world’s population, compared to 14,000,000 or 0.2% . That alone should speak volumes.  To put it in to perspective, if the same number of Jews was killed today as in the Holocaust, their number would drop by almost half.  If the same number of Muslims were killed, the loss of life would essentially be statistically insignificant.  Muslims can not be a persecuted group simply based on sheer numbers.  They are nearly one-quarter of the earth’s population. The State Department is comprised of fools led by President Obama.  Once again, he and his administration are placating Muslims in order to look unbiased, reasonable, some one Muslims can deal with.  There is no other explanation.  What President Obama will never realize, is that it’s viewed as a sign of weakness in the Muslim world and will not help his cause or standing.  And what about Christians?  They are far more likely to be persecuted or killed in Muslim countries than the reverse?  The reason Belgium limits full face coverings is to limit potential terrorism.  In an effort to cover his tracks with his Jewish supporters, President Obama’s Secretary of State, John Kerry appointed Ira Forman as the Special Envoy to monitor and combat Anti-Semitism.  But that doesn’t negate the fact that the State Department and President Obama, should never have released such a flawed and silly report to be published for the world to see. I suppose we are simply viewing the true President Obama with all of the scandals and flawed individuals in his administration.  Right now 2016 looks very far away.