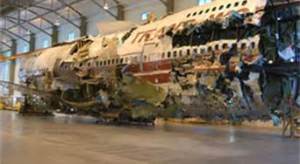 On July 17, 1996, TWA Flight 800 exploded off the coast of Long Island as it was preparing to cross the Atlantic on its way to Paris.  At the time there much speculation as to what downed the 747 passenger jet with 230 souls aboard.  There was speculation that terrorism or missiles were the cause, but in the end, it was determined faulty wiring in the center fuel tank, caused the explosion that brought down the aircraft. The center fuel tank was not filled to capacity and dangerous fumes were ignited by a short in the wiring. It was called a flaw in the design.  However, even at the time, there were those who said they saw streaks of light heading toward the plane from the water. If this incident hadn’t occurred prior to 9-11, the calls for further investigation might have been heeded.  Now, investigators are calling for the re-opening of the case, seeking the true cause of crash of flight 800 which they say, was a missile. Jim Speer, an accident investigator for the Air Line Pilots Association and one of the people calling for a new review of the probe, has said, “We don’t know who fired the missile but we have a lot more confidence that it was a missile.”  His statement coincides with the release of a documentary on EPIX next month, on the 17th anniversary of the crash.  Another person calling for the re-opening of the case is Tom Stalcup, a physicist and co-founder of a group called Flight 800 Independent Researchers Organization.  He is featured prominently in the documentary, which could leave us suspicious and questioning his motives.  In response, the National Transportation Safety Board (NTSB) issued a statement saying it is aware of the upcoming documentary.  “All petitions for reconsideration are thoroughly reviewed, and a determination is usually made within about 60 days,” spokeswoman Kelly Nantel said. “While the NTSB rarely re-investigates issues that have already been examined, our investigations are never closed and we can review any new information not previously considered by the board.”  Ms. Nantel also pointed out that the original investigation lasted four years and wasn’t simply a rush to judgement.  “Investigators took great care reviewing, documenting and analyzing facts and data and held a five-day hearing to gather additional facts before determining the probable cause of the accident during a two-day board meeting.”  Whether anything will come of this remains to be seen.  But after 17 years, unless new and compelling evidence is presented, it’s highly unlikely.