By CJujitsu July 2, 2013 Music and Entertainment 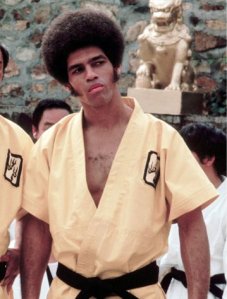 Actor Jim Kelly best known for his role in Bruce Lee’s Enter The Dragon, has died from cancer at the age of 67.  Enter the Dragon, Bruce Lee’s first movie in english, was released days after his death at the age of 32.  It is still considered to be the most popular and well-known Martial Arts Movie ever made and the reason why Martial Arts became so popular in the US.  Who at the time didn’t want to fight like Bruce Lee.  But Jim Kelly was the cool one in that movie with one liners; the ladies man.  In a 2010 L.A. TImes interview Kelly said, “I broke down the colour barrier.  I was the first black martial artist to become a movie star.  It’s amazing to see how many people still remember that, because I haven’t really done much, in terms of movies, in a long time.”  Kelly’s other Martial Arts films included The Black Samurai, Golden Needles, Black Belt Jones, Three the Hard Way and Melinda.  In the interview Kelly spoke about his movie career adding that, “I never left the movie business. It’s just that after a certain point, I didn’t get the type of projects that I wanted to do. I still get at least three scripts per year, but most of them don’t put forth a positive image.”  Kelly spoke about the similarities between his experience and Bruce Lee’s experience in Hollywood.  He once said in an interview that “Bruce Lee caught hell in Hollywood because he was Chinese. They didn’t want him in Hollywood.”  No greater evidence was needed than the fact David Carradine was cast in Kung Fu over Lee, despite the fact the part was made for him.  One can only imagine what that show would have become if Bruce Lee had been allowed to play the role of Thomas Caine. Kelly was born in Kentucky and took up the Martial Arts in 1964.  By the time he was asked to co-star in Enter the Dragon by Fred Weintraub, he was already accomplished in Karate, owning his own school. That movie and Kelly in particular, made the Martial Arts cool and was one of the motivating factors that got me started in the Martial Arts. According to the announcement of his passing, he is survived by “his life partner of 33 years and wife.”