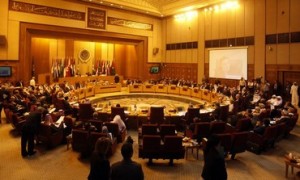 In a show of unity against Bashar al–Assad and his use of chemical weapons, an Arab League resolution was voted on and passed, calling for the U.N. and international community to take action against the Syrian Government.  Specifically, the resolution as passed urged both the U.N. and international community to “take the deterrent and necessary measures against the culprits of this crime that the Syrian regime bears responsibility for.”  Saudi Foreign Minister Saud al-Faisal said mere condemnation of the Syrian chemical weapon attack that killed 1429 civilians, according to the U.S., does not go far enough.  Opposing international action on the grounds it’s “foreign intervention” is totally unacceptable.  “Any opposition to any international action would only encourage Damascus to move forward with committing its crimes and using all weapons of mass destruction,” said Faisal.  “The time has come to call on the world community to bear its responsibility and take the deterrent measure that puts a halt to the tragedy.”  Algeria, Lebanon, and Iraq refused to back the resolution while the Egyptian Government said it was against a military strike but did not oppose the resolution.  What’s fascinating is the re-alignment of the middle east.  Historically, Israel was always the enemy and the Arab States rallied around her destruction.  Today, the more moderate, secular and wealthy Arab nations understand that Israel is the smallest threat in the region and extremist Arab governments are the ones that pose the greatest threat to their survival.  The sense of urgency demonstrated by the meeting and subsequent resolution clearly demonstrates the threat posed by the Assad government. President Obama was set to strike Syria without U.S. Congressional approval but in the final hours, decided it was best to be transparent and to allow Congress to familiarize itself with the strike, prior to giving the order to proceed.  After all, if he had called for a military strike without asking the Congress and American lives were lost, he would have had to answer to Congress and more importantly, the American people.