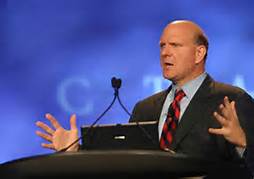 Microsoft has completed a deal to purchase Nokia’s mobile phone unit for $7.2 billion dollars ($5.4 Billion Euros).  In response to the deal and as could be expected, Nokia shares jumped 35% and Microsoft shares fell 5%.  Microsoft chief executive, Steve Ballmer described the deal as a “big, bold step forward”.  As he explained it, Ballmer wants to move the company that, “was known for software and PCs, to a company that focuses on devices and services”.  He continued, “We’ve done a lot of great work in the two-and-a-half years that we’ve been in partnership with Nokia, going literally from no phones to 7.4 million smart Windows phones in the last quarter that was reported.”  He is clearly focused on the link between the hardware and software believing the ownership of both will vastly improve the overall quality and integration of the product. While not difficult to understand the strategy, it’s a huge gamble.  Nokia sales have been sliding.  In Q2, 2013 vs. the previous year, sales declined 24%.  Despite that, Nokia is still the second largest mobile phone seller in the world behind Samsung.  Apple is a distant third selling 1/2 the 61 million units that Nokia sold in Q2.  Samsung sold 107 million units far outpacing the competition.  Whether this turns out to be a big bold move or simply a bust, is a matter of time.  In fairness to Ballmer, he is serious about bringing Microsoft in to the mobile phone business, an area in which Microsoft has lagged.  Steve Ballmer recently announced his intent to retire within in the year. Summing up his time as chief of one of the largest technology companies in the world he said, “I’m pleased with what we’ve achieved; I’m pleased with the level of innovation we’ve brought to intelligent devices around the globe.  But there’s always another challenge and with this acquisition we’ll take things up to the next level.”