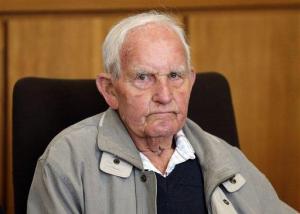 In what will likely be one of the last Nazi trials in Germany, Nazi SS officer Siert Bruins is standing trial for the murder of Dutch citizen Aldert Klaas.  In the incident, Mr Bruins is accused of shooting Aldert Klaas Dijkema, four times in the back, after he was captured in September 1944 in the Appingedam area east of Groningen. A court statement said, “The accused is alleged to have taken Mr. Dijkema on the orders of his superior in a car to a factory.  There, the accused and his accomplice are alleged to have shot Mr. Dijkema four times.”  The statement continued, “He was hit in the back of his head among other places and died immediately. Later on, the accused and his accomplice admitted that Mr. Dijkema was shot as he tried to flee.” Although he admitted being there, he denied he was the shooter.  Instead, he claimed he was marching alongside a soldier when shots were fired.  According to Stephen Evans of the BBC, after the war, Mr Bruins lived in Germany but the authorities refused to extradite him to face charges in the Netherlands.  Mr Bruins became a German citizen in 1943 under the so-called Fuehrer’s Decree, which gave German nationality to all foreigners who worked for the Nazis. While to some, the prosecution of a 92-year-old “helpless old man” may seem cruel, all men like Mr Bruins must be prosecuted to the full extent of the law.  Their participation in the Nazi death machine is inexcusable and unforgivable.  The men and women who took part were themselves sadists who killed for the pure enjoyment of it.  They were no better than those who gave the orders.  Therefore, the hunt for these murderers must continue.  It must be done as a testament and tribute to all those who died under the most sadistic and evil movement that has ever existed on this earth.  Like a cancer, every piece of it must be removed.  The scapegoating of six million Jews in addition to seven million other human beings who didn’t fit in with the Nazi vision was simply a way of denying their own shortcomings. The world must never forget what took place only 70 years ago and the continued prosecution of these war criminals, is one important way of doing just that.