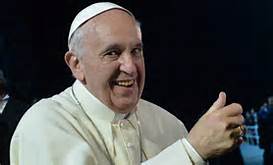 Pope Francis is proving to be a unique and outspoken Priest.  He’s a man the Church has not yet seen in its two thousand-year old history.  Quite simply, he is a pragmatist.  In an interview with  Jesuit magazine he said the Church, “must show balance and heal wounds.”  Pope Francis used his interview with La Civilta Cattloicato to discuss his view that, “The church’s pastoral ministry cannot be obsessed with the transmission of a disjointed multitude of doctrines to be imposed insistently.  We have to find a new balance, otherwise even the moral edifice of the church is likely to fall like a house of cards, losing the freshness and fragrance of the Gospel.”  This is very different language than all of his predecessors including the very popular John Paul.  Pope Francis described it this way, “It is useless to ask a seriously injured person if he has high cholesterol and about the level of his blood sugars,” he said. “You have to heal his wounds. Then we can talk about everything else.”

This Pope is clearly attempting to create a kinder, gentler and more inclusive Church.  And considering that at least in the United States, religion is becoming a far less important part of our lives, it’s an important step forward. As in civil law, religious law must be flexible and change with the times.  That doesn’t mean the Church must accept abortion, but it does mean it needs to deal with certain realities i.e. gay people exist and most people sitting in the pews are in fact using contraception. Just because the Church preaches otherwise, doesn’t mean it has any validity.  Pope Francis defends his positions and states that his open-mindedness is not contrary to Church teaching.  “This Church with which we should be thinking is the home of all, not a small chapel that can hold only a small group of selected people. We must not reduce the bosom of the universal Church to a nest protecting our mediocrity,” he said.  Whether he will be able to move forward with this progressive agenda remains to be seen.  But he has certainly done much so far, to bring the Church closer to her faithful and that cannot a bad thing.