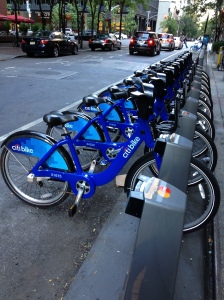 For those unaware, Mayor Bloomberg has been a huge proponent of open space and pollution reduction.  I suppose that makes him an environmentalist of sorts, though I have never heard him referred to as the environmentalist mayor.  He is also concerned about the health of all New Yorker’s.  Hence, all restaurant menus, including fast food, must list fat and calorie content.  And one particular policy issue which was discussed nationwide, and was subsequently struck down by a judge, was the mayor’s call for no sweetened beverages over 16 ounces to be sold at restaurants, fast food or other.  While certainly arbitrary and beyond the scope of the function of government, Mayor Bloomberg believed he was helping to reduce obesity and improve the health of citizens residing within the five boroughs of New York City.

His latest plan to reduce traffic is also intended to reduce New York’s carbon footprint; rows of rental bikes throughout the city for everyone to use.  All you need to do is insert a credit card and off you go. You can take the bike wherever you wish.  Your card is charged based on the number of hours or days you have it in your possession.  If it isn’t returned, well, the city has your credit card information.  Besides, it isn’t that cool to possess a bike that says Citibike on it.

So far, so good. The bikes are being used all over the city, as intended.  The problem is, the bikes don’t come with helmets. You must bring your own.  So now, New York City streets are crowded with Citibikes and bicyclists that aren’t wearing helmets.  As an avid skier who would never think of wearing a helmet on the slopes, I completely understand not wearing one.  But even this rebel, if riding on the streets of New York, wouldn’t think of riding a bike without one. Taxi cab drivers care about nothing other than picking up or dropping off fares.  Before long, one will hit and seriously injure or kill a Citi-Bicyclist and the re-thinking of this part of the mayor’s green policy, will come under review. Unfortunately, it will take a serious injury or death to spark such a review.  And yet it seems so obvious to this writer.  I certainly hope nothing happens but when it finally does, you heard it here first.