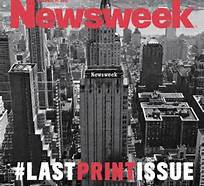 Newsweek’s editor, Jim Impoco announced to the New York Times that Newsweek will return to the Print Newsstand early in 2014.  While it appeared to be a surprise to many, those in the industry were expecting this announcement.  Rumors have been flying for months. Most people in the industry see it as a last-ditch attempt to survive but those are simply the pessimists who always see the glass as half empty.  Instead, it should be viewed as a confirmation of the value of print whether or not Newsweek survives in the long-term.

Mr Impoco said that the way to make it work is by charging a premium price. It’s a magazine model that mirrors other publishers like The Economist and Taunton Press, which are less reliant on advertising dollars and which make money on each copy sold.  “It costs a certain amount to produce a print product, but traditionally, companies were charging less than the cost and hoping advertisers would make up the difference.  Basically, we’ll charge consumers more than it costs us to produce it.”  When Newsweek ceased its print edition, it had 1.35 million subscribers.  Mr Impoco said he hoped to have 100,000 subscribers by the end of year one, all paying a premium price, not the pennies per issue in some cases, that was based solely on a model of advertising rate base.  In order to build readership, Impoco plans on selling copies at retailers like Barnes & Noble and in airports and converting at least some, to subscribers.  In addition, he wants to pitch the Newsweek app to current subscribers.  It’s a multifaceted approach that will undoubtedly be the model for the future.  But the important realization that print is still relevant should be noted by every publisher.

As Mr. Magazine, Dr Samir Hosni boldly stated at the last Distripress conference in Toronto, Canada, “not one publisher has successfully killed his print edition and thrived in the digital world.”  I think this is becoming more clear as this new world unfolds before us.  There simply is not enough revenue generated to run a magazine in the digital world.  Advertisers are not willing to shell out the kind of dollars they’ve always spent on print advertising, pennies on the dollar and there is no sign that will change in the short or long-term.  Therefore, we should all agree that digital will not in the near term upend print.  The new model will require a little bit of everything which is what Newsweek and other magazines are now realizing.  That may be enough to restore the magazine business to profitability and convince publishers to launch new, important products in to the market, something that’s been lacking in recent years.  One thing is certain, the current model is no longer working and must therefore be changed and improved.  It will take “outside the box” thinkers and people willing to try new approaches and perhaps failing in their attempts.  But it’s the only way the world of magazines, both print and digital will thrive in the new world.