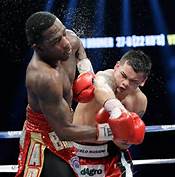 Adrien Broner lost his WBA Welterweight Belt to Marcos Maidana in a fight that capped off a great year in boxing.  Scoring in the fight was 117-109, 116-109, and 115-110.  The scores would have favored Maidana even more had he not fouled Broner in a frustrated attempted to free his arms from Broner’s wrestling hold, following his second knockdown of the fight in the eighth round.  The first knockdown and almost knockout, came in round two but Maidana simply became arm weary from the punishment he was dishing out, and couldn’t put Broner away.  To his credit, Broner did get up and fight back after both knockdowns and even gave a spirited effort in the final round in his attempt to knockout Maidana.  But in the end, it was Maidana’s night.  He would not be denied. Two things we learned from this fight about Broner, 1) he has not fought enough top competition and 2) a big mouth alone, does not a fighter and a career make.  Broner simply never fought anyone like Maidana with power in both hands and a strong, unrelenting desire to win.  Paulie Malignaggi, in Broner’s previous fight which earned him the belt, gave Broner all kinds of trouble and would have possibly won, if he possessed the power of Maidana.

Broner will come up with all kinds of excuses because that what little boys do, but none of them will be legitimate or should be taken seriously.  Let’s face it, he is no Floyd Mayweather.  He may attempt to fight like him but he will never be him.  He doesn’t possess the skills of Mayweather but no one does.  The bigger problem for Broner perhaps, is that he believes the way to put people in the seats is to be hated and that isn’t the case.  Mayweather, with all of his flashiness and money still knows when to turn it on and off.  Floyd apparently hasn’t taught Broner that part of his repertoire.  More importantly, Mayweather backs up his exploits with what he does in the ring, Broner didn’t.  Being hated as passionately as the public hates him, is not going to help his cause.  Most fight fans enjoyed his destruction and would simply love him to fade away in to oblivion.  On the other hand, despite some of his exploits, boxing fans can’t get enough of Mayweather. It would serve Broner well, to admit defeat, be somewhat humble and get back to the gym as soon as he recovers.  He needs to let his boxing skills speak for him.  Being loud and boisterous is fine.  Being obnoxious and disrespectful is not.  Pride cometh before a fall, and Broner fell hard, twice.  Only time will tell if he is able to recover and learn from this loss.  He certainly has the talent but the question is, does he have the intelligence?

Finally, the Showtime boxing commentators, Brian Kenny, Mauro Ranallo, Al Bernstein and Paulie Malignaggi did an incredible job with this fight.  Their call of the fight and post fight commentary was right on the mark.  It was perfect.  They told the truth and gave an honest perspective despite the fact it might night sit well with a certain camp or boxer.  That has been one of the great flaws in boxing for many years; not speaking out on the truth.  Congratulations to Showtime for putting on a tremendous final card of 2013.