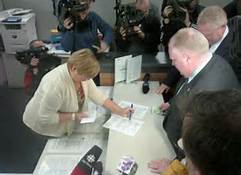 Politics is a strange game and politicians are even stranger.  In what most people would have thought would be his swan song, Rob Ford is apparently putting scandal behind him and has filed for re-election.  He has been prone to inappropriate behavior and has essentially been stripped of all his power.  And yet even with his past, he believes he can win re-election.  After putting his name in the ballot to run for another term he revealed that his re-election campaign slogan will be “Ford more years”.  Ford told journalists, “I’ve got the strongest track record.  I’ve been the best mayor this city has ever had.”  That is certainly up for debate and will be challenged.

Ford was the first person to put his name on the ballot although it’s expected that liberal candidates will soon join.  In defending his record, he said, “My track record speaks for itself. We’ve got the lowest taxes than any other
major city in North America. The city is absolutely booming.”  He continued, “I’ve dealt with the issues that other mayors couldn’t deal with.”  Of course many of the issues he’s dealt with were of his own making.  Toronto is a city with a strong economy and low crime but that may be despite Ford not because of him.

In the past number of months, he’s been accused of abusive and threatening language.  It’s been alleged that he sexually positioned a female colleague, and was caught on tape smoking crack.  Politics is indeed a strange game but it remains to be seen if the friendly citizens of Toronto will be willing to forgive and forget, Ford’s many shortcomings.