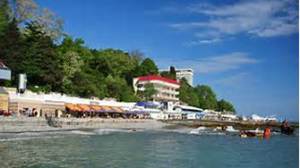 Despite the nonsense you will hear at the end of the Sochi Winter Games about how great they were, the fact is, Sochi should never have been awarded the Winter Games.  Sochi is a beach town that happens to have tall mountains with snow in the background.  No further proof is needed than the fact that it’s currently 57F (14C).  The temperature for the remainder of the week is supposed to hover in that same neighborhood.  If not for modern technology, this beach community on the Black Sea wouldn’t be hosting the games.  There are more than enough countries with real mountains and real winter that could and should have been chosen as the host city for the winter games.

It makes no difference whether one believes that the only reason Sochi was chosen is the corrupt Olympic committee or perhaps Putin bought the games for Russia.  We will certainly never know that for sure but obviously something is amiss and it isn’t global warming.  Sochi is a warm place and always has been.  Watching the half-pipe event and believing that Shaun White might have realized a better fate had the pipe been frozen instead of soupy, is frustrating.  To his credit, he said all the other competitors were dealing with the same conditions, which is true.  But in horse racing you have mudders who love the muck and other horses who hate those conditions. The  Winter Olympics should always have perfect conditions and one need not have a degree in meteorology to understand this was unlikely to happen.

The winter Olympics should never again be granted to a city where there is no snow at the venue where the opening and closing ceremonies take place.  Snow is a really important part of the games.  Without it, the venue loses the feel of what the winter games are about.  It brings to mind the movie Cool Runnings when John Candy arrives in Calgary with the Jamaican bobsled team and the temperature reads -25C.  He says, “it’s not the heat but the humidity that will kill you.”  That’s winter.  Dealing with heavy snow, cold and fog is the only adversity the athletes should face; normal winter adversity.    Seoul South Korea, host of the 2018 games is a far better choice with 13 ski resorts located within a few hours of the capital.  As a point of interest it’s 32F (0C) in Seoul as I write this.  This was a farce that simply fed Putin’s need for power and recognition.  The Emperor is naked and the Sochi Games are an unmitigated disaster from the poor downhill race course conditions to that horrible half-pipe, to the unfinished rooms and poor water quality.  But most importantly, these aren’t what the winter games are supposed to be.  Calgary, Canada was a great location.  There’s tons of snow in Austria, Sweden, Switzerland, and Lake Placid.  Why don’t we just choose Cameroon for the next Winter Olympics?  The Olympic Committee should be ashamed.

2 thoughts on “Sochi Olympic Debacle Should Never Again Be Repeated”