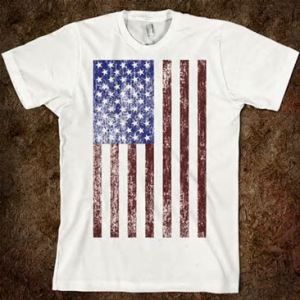 In what can only be defined as the true definition of insanity, the 9th U.S. Circuit Court of Appeals, has upheld a ban on High School Student wearing American Flag T-Shirts.  The reason for the ban, so students of Spanish decent aren’t offended during the Cinco De Mayo holiday celebration.  The thought process behind this outrageous decision is that it might incite violence.  The Court specifically said the officials’ “concerns of racial violence outweighed students’ freedom of expression rights.”  Since when has inflaming passions ever been a reason for curtailing free speech or freedom of expression.  Nazi’s and the Ku Klux Clan have received permits to march but this high school somehow falls outside the rights afforded to the students by the United States Constitution?!

To that I say, anyone living in this country and attending school here, who is offended by the American Flag, should simply get the hell out of the country.  How can a liberal state like California deny free speech to students who choose to wear the flag of their country.  It’s outrageous!  And every American should be offended by the logic of such a decision.

The panel of three judges said that past problems gave the school justification for the ban.  So the logic is, because this school can’t control their students, the limitation of expression is justified.  That’s nuts and the judges on the panel should be thrown off the bench for incompetence.  Judicial decisions are supposed to be based on the rule of law and precedent, not on the current state of affairs in one particular school. The precedent these three geniuses are setting is dangerous.  All anyone has to do is threaten violence and we give them whatever they want?!

William Becker, one of the attorney’s representing the students has said that he will ask a special 11-judge panel of the appeals court to rehear the case. If he loses again, he said he would appeal to the U.S. Supreme Court.