Putin Testing Obama: Will The President Fail The Test? 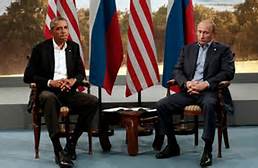 The fall of the stock market has far less to do with the possible negative financial ramifications than it does regarding the market’s hatred of instability and uncertainty.  The Ukraine, as a separate country from Russia had very little impact on the United States before this crisis began and only the prospect of shale oil, which is a lousy source of oil anyway, and natural gas, makes this crisis important at all.  So let’s not make the Ukraine more important to our interests than it actually is.  When it was part of the Soviet Union, it didn’t matter at all.  Now, because the gas producers have an interest in mining oil, it’s crucial to our national interests?  The fact is, it’s not.  The Ukraine means nothing to us and all of these so-called political scientists, (that’s the very definition of an oxymoron) know very little about this region of the world, even in 2014.  I was fortunate to have studied business and politics in graduate school at the time of perestroika and the collapse of the Soviet Union.  I studied with exiled Russian scholars and professors and gained a very different and unique perspective.  Believe me when I say that no one knows less about that part of the world than those of us in the United States.

There are several things in play here.  First, there is a desire of many people living in the Ukraine who would like to once again live under Russian rule; having never wanted to become part of an independent state in the first place.  It’s no different than the group of American colonists,(loyalists or Tory) who wanted to remain part of Great Britain.  Second, Russia would love to again control the former Soviet Republic because of its natural resources.  The Ukraine was and is the breadbasket of that part of the world.  In addition to owning most of the arable land in the region, it also holds the second largest reserve of natural gas after the United States.  There is also a large reserve of shale oil that needs to be mined.  Finally, military action abroad is always a good way for dictators to draw attention away from the problems at home.  And there are many problems facing Russia, not the least of which is systemic corruption.  This invasion is a smart strategic decision on Putin’s part which leads me to my final point.

Putin’s blatant disregard for international law has as much to do with his belief that President Obama is weak, as it does with his desire to help the people of the Ukraine.  If former President Bush was in power, the situation might be far different.  Threatening action only works to a point.  Putin understands that other than sanctions, there’s nothing we can do.  And sanctions are not a good option because that works both ways.  Unfortunately, the reality of the world continues to be that bullies will always get away with whatever they please until someone demonstrates the willingness to stand up to them.  Putin, former member of the KGB, understood and understands this all too well.  The only thing this President will have to offer as a retort are eloquently worded statements.  We are at a very important crossroads in history.  If we do nothing, Putin wins and sets a terrible precedent.  I’m not saying that we send in troops but I am suggesting that the worded statements are stronger than simply saying the world is against you and you better quit it.  Remember, the pen is mightier than the sword, except in a sword fight.