Cause Of Ferry Accident Is Not Inexperienced Third Mate 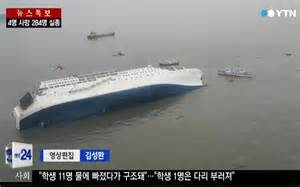 Now that no further survivors will be pulled from the Korean Ferry, answers are being sought.  I have read several articles about the experience or lack of experience of the 25-year-old third mate who was supposedly steering the ferry when the accident occurred.  She is under investigation to see if her negligence caused the ship to list during a turn and then capsize.  Although the fault ultimately lies with the captain, there should be no conclusions about the cause until there is hard evidence.  But one thing that should be considered is that excessive speed probably did not cause the accident.  According to reports the ship left late due to fog.  The least experienced boater knows that even with radar and GPS fog equates to slower speed.  Chances are, whoever was steering the ship, wasn’t going full speed or even cruising speed as those waters are tricky with perfect visibility.  The captain stated that he was heading back to his cabin at the time of the incident meaning that he had no reason to believe anything out of the ordinary was taking place.

Further to that, upon looking at photos of this ferry, it was not a high-speed ferry but rather a ship with a deep draft, meaning that it can only go so quickly.  Even turning the wheel hard over at full speed should not have caused the ferry to capsize unless, the ferry was overweight due to either overcrowding or other excessive weight.  Again, this is only speculation but boats become unstable when the weight to displacement ratio is too high.  At that point the boat doesn’t require much force to tip over.  Anyone who has ever flown on a regional jet knows that the flight attendant will move people around the plane in order to balance it properly.  Even if the ship was traveling at speed that was not excessive and the passengers were predominantly standing on one side or fell to the same side, that could have caused the ship to capsize.  If only the captain and crew were on board, a sharp turn with open throttles would not be able to capsize the ship.

More important however, is again we have a captain abandoning ship before his passengers.  It’s unforgivable, cowardly and should be punishable by life in prison.   No apology is acceptable.  Anyone not familiar with the laws of the sea may not understand the severity of what he did but there is no worse crime on the ocean than to leave innocent civilians on board while you, the captain, save yourself.  Hopefully Lee Joon-Seok will be tried and convicted and spend the rest of his life in prison.

Although the ship is scheduled to be salvaged, it will take two months and even then, there’s no guarantee that a definite cause will ever be found.  But at least some of the families will find closure.