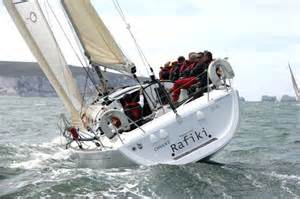 A UK Racing sailboat is missing in the Atlantic with four in crew.  The Cheeki Rafiki was returning to the UK after a Caribbean regatta.  At some point, the boat began taking on water, at which time the Captain called the United States Coast Guard which initiated a search.  The Southampton charter firm Stormforce Coaching, also received a call.  Director of Stormforce Doug Innes said: “We were in contact with the skipper and at the time the yacht and crew were keeping the situation stable.  “They had not been able to ascertain where the water ingress was from and were diverting to the Azores.  Innes continued, “Unfortunately we lost contact during the early hours of Friday morning and we believe it is possible the crew abandoned to the life raft.”  They have not been heard from since.

According to an official Coast Guard press release, it searched 4,146 square miles and was “extremely disappointed” not to have found the sailors. However the conditions during the search were difficult with 50 mph(80kph) winds and 20 foot (6m) high waves and visibility as low and 1 mile(km).  “It is extremely challenging to respond to a distress case so far off shore, which is why it takes a joint effort with our international partners to put forward an effective search,” it said.  Coast Guard spokesman Rob Simpson told the BBC that two of the yachtsmen’s locator beacons had been activated, providing it with some “general GPS co-ordinates”.  Unable to locate the crew, the Coast Guard called off the search.  An overturned hull has been spotted by a container ship involved in the search “that did look like it may have been the sailing vessel”. However, the ship did not stop to inspect the hull because nobody was seen on board.  Aircraft and ships have been alerted to the position of the upside down vessel.

While the ocean is vast, it’s disappointing that even with GPS locator beacons, and state of the art enclosed life raft, which an ocean crossing vessel would have undoubtedly had aboard, the sailors have not been found.  In addition, they would have easily been able to give latitudinal and longitudinal positions, pinpointing were they were.  Of course if there was a catastrophic failure of the life raft that far out in the ocean, the best technology in the world would make no difference.  But the fact that the sailors were in contact with Stormforce and the fact that it was known they were in distress, should have made this rescue possible.   With all of the available technology and satellites circling the globe there’s no reason for any vessel, be it a sailboat or Flight MH370, to disappear without a trace.  But once again, despite all efforts, we see man’s limitations.