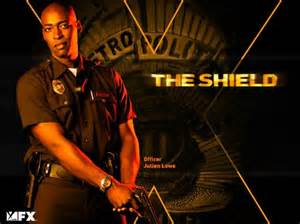 Shield Actor Michael Jace 51 has been arrested on suspicion of killing his wife, 40-year-old April Jace.  She was discovered shot and dead in the couple’s Los Angeles home after reports of shots being fired.  According to Lt. John Jenal from the Los Angeles Police Department, Jace’s two children were at home at the time of the shooting.  Jace was married to his current wife for nine years and was previously married to Jennifer Bitterman but that ended in divorce.  He also had one child with her.  Perhaps Bitterman should be thankful she got out in tact.

Although crimes of passion are most common, they are difficult to understand.  What could drive a spouse to brutally and callously kill the mother of your children?  To care less about your children than you do about yourself is the mark of bad parent and worse, a bad human being.  Men who kill women are cowards.  They abuse and kill women because they can.  Women on the other hand generally kill their spouses when there is no alternative.  Not in every case of course but that is the rule, not the exception.  We must consider Jace innocent until proven guilty but it’s not looking good for him.  Perhaps Jace can seek advice from Oscar Pistorius on how to attempt to defend against an obvious murder.

What could his wife possibly have done?  Perhaps she cheated on him, was spending too much money, was nagging him or didn’t have dinner on the table.  Whatever the reason, it’s obviously not enough of a reason to kill.  In fact, there are only a finite number of acceptable reasons to kill another human being and they include, self-defense, war and capital punishment.  Men in particular need to learn to control their tempers in that moment of rage just prior to carrying out a heinous act.  One should be able to logically think, no matter how enraged, that perhaps a bad marriage is hardly enough of a reason to spend the rest of your life in prison.  It’s just so absolutely ridiculous that it’s difficult to comprehend.  In the Martial Arts controlling your fear and anger, are life long ambitions.  If you can overcome both, there’s nothing you cannot accomplish.  Obviously Jace failed in at least one of those.  He is being held on $2 million dollars bail.