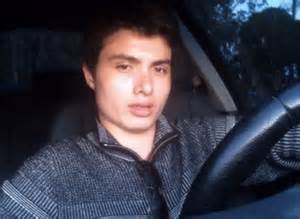 Elliot Rodger, the deranged 22-year-old who believed he would show what a man he is by “taking revenge against humanity”, will be remembered as nothing more than a maladjusted crybaby who couldn’t figure it out.  No sympathy and explanations should be afforded to him.  It’s time for this society, which has swung 180 degrees in the opposite direction of when I was a child, to be brought back 90 degrees.  Children need to fight for themselves, to struggle.  Not bullying but struggling builds a coping mechanism so often missing from today’s youth.  Not every meager achievement needs to be rewarded and not every child needs to be told they’re wonderful unless they really accomplish something wonderful.  Stress and adversity are good things.  They are what make men and women great.  They are what give human beings an edge as long as they don’t cross the line to neglect and abuse.

Mental illness does not include frustration over not being popular or not being able to get the girl you desire.  That’s pure nonsense and this crap has got to end.  What should have happened to Rodger, is someone needed to put their fist down his throat to toughen him up a little.  I know that’s not a popular idea but often the truth and reality aren’t.  We should not bow to lunatics by giving them credibility.  People who are “off” can not be placated in the hope that perhaps they won’t lose it and go on a killing spree.  In fact just the opposite is necessary.  People have to become involved and deal with someone like this in any manner necessary to stave off such violence.

Santa Barbara County Sheriff Bill Brown, said, “it’s very apparent” that the gunman was “severely mentally disturbed”, adding: “It’s obviously the work of a madman.”  Family attorney Alan Shifman, said he had been “diagnosed at an earlier age of being a highly functional Asperger Syndrome child”.  Are we going to allow Asperger’s to be used as an excuse for a murder spree?  There are thousands of high functioning Asperger children and adults who aren’t killing people.  It was difficult for him to make friends?!  Poor baby!!  He was able to speak to the police sanely and rationally after his mother called them because he was acting strangely.  He was clearly sane and understood what he was about to do.  His You Tube Video clearly demonstrated rational thought and behavior.  He was just pissed off at the world because he was a loser who’s mommy and daddy probably told him the world could be his, if he only wanted it.  And unfortunately, even for the privileged, without hard work and ability, nothing is assured.

The only people who deserve sympathy in this case are the families of the victims.  Let’s focus on those families and not use this misguided, loser of an individual to somehow make the case for better mental illness treatments.  That is not what this case is about.  Don’t allow the liberal media to somehow blame society for one person’s lunacy.