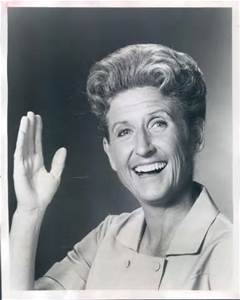 Brady Bunch housekeeper Alice, played by Ann B. Davis, has passed away at the age of 88.  It was reported that she fell down inside her home and hit her head. According to the autopsy, she suffered a subdural hematoma and never regained consciousness.

Everyone who grew up watching the Brady Bunch wished that they had a housekeeper like Alice.  She was funny and wise and generally was the person on whom everyone in the family relied.  Although we still joke today about how Cindy has the sniffles, when referring to a major problem, the Brady Bunch did attempt to deal with real-life issues in a very pure and simple way.  Who didn’t want to be part of that family?

Ann B. Davis did have a career prior to the Brady Bunch playing the role of Charmaine “Schultzy” Schultz on The Bob Cummings Show which ran from 1955 to 1959.  She won two Emmy’s for that role which led to a Star on the Hollywood Walk Of Fame in 1960.  Referring to her role as Alice on the Brady Bunch she once said, “Wouldn’t we all love to have belonged to a perfect family, with brothers and sisters to lean on and where every problem is solved in 23 and a half minutes?”  It’s for that reason, that it continues to air in syndication today despite the outdated clothing, and silly expressions like “far-out” and “groovy”.  Who could ever forget Alice running through the amusement park with Mike Brady’s plans?  Rest in peace Alice.