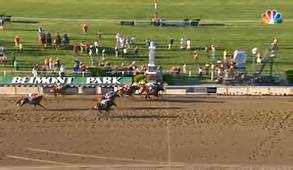 Although California Chrome was the horse to beat on a beautiful day in Belmont Park, he came up just short, tying for fourth with Wicked Strong.  As I stated in an earlier post, the Belmont is about heart and desire as much as ability since we know this horse had ability. Apparently he did suffer a gash on his hoof which may have prevented him from running his best time, although that can not be used as an excuse as to why he lost the race.

There is one legitimate reason in my estimation why he lost and that can be attributed to a poor ride by jockey, Victor Espinoza.  California Chrome was perfectly situated along the rail when he exited the gate and should not have given up that position so early in the race.  Espinoza might not have wanted to push Chrome but the Belmont Stakes is a different race than the first two legs of the triple crown and must be approached differently.  If one looks at Secretariat’s run at triple crown history, in both the Kentucky Derby and Preakness, Jockey Ron Turcotte ran from behind and won both races.  However in the Belmont, Turcotte took out Secretariat and essentially lead the race from start to finish other than a couple of challenges from Sham, a speedy, great horse, who faded at the end only to finish out of the money.  But Chrome does not possess the finishing speed of Secretariat and therefore should not have been permitted to leave the rail particularly because the first 3 splits were lackluster at best.  This was not a fast pace where the jockey riding the favorite didn’t want to burn out his horse.  This was simply a mistake in strategy.

Now lets address sore loser, and co-owner, Steve Coburn.  Quite simply, he was wrong.  He should have accepted defeat gracefully.  Coburn said after the Preakness that horses should be required to run in all three Triple Crown races.  “It’s all or nothing,” he said. “This is not fair to these horses and to the people that believe in them. This is the coward’s way out.”  But all of the previous triple crown winners have had to endure that same stress.  Quite simply, California Chrome lost because he ran a slow time, not because the other horses were fresher, specifically, Tonalist.  Chrome ran 2:29 and Tonalist finished in 2:28 2/5, nothing to write home about.  California Chrome should have easily been able to run at the front of the pack from start to finish.  In comparison, Secretariat’s 2:24, the fastest Belmont Stakes in history, will likely never be broken but both 1978 triple crown winner Affirmed who finished in 2:26 4/5 and second place finisher Alydar bested 2:28.  The field ran a slow time and California Chrome should have found a way to win.  It had nothing to do with fresh vs. tired horses.

Finally, the only thing California Chrome’s loss proves is how difficult it is to win the triple crown.  Prior to Secretariat’s win in 1973, there was a drought of 25 years dating back to 1948 and Citation, who also beat Tonalist’s time with an 8 length win in 2:28 1/5.  Think about that for a second.  With all of the modern training, Citation, 66 years ago, beat Tonalist’s time.  It was Chrome’s race for the taking and he simply didn’t do it.  Sorry Steve.