Weighing In On The Michael Brown Case: As Many Questions As Answers 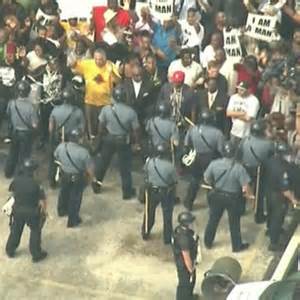 While there are still more questions than answers surrounding the Michael Brown saga that is playing out in Ferguson Missouri, some pieces of the puzzle are now in place.  First, Michael Brown was unarmed when he was shot in the street.  Second, the autopsy results have been released and Michael Brown was shot 6 times, including twice in the head.  Third, the investigation has proceeded extremely slowly which is not in the best interest of law enforcement because with each passing day, faith in the police and the system diminishes.  Fourth, there has been increasing violence and some looting, much of it perpetrated by people from outside the community; rabble rousers looking for an opportunity to make trouble and steel a few dollars at the same time.  And fifth, the use of what amounts to military force is not the way to proceed in this case.  Have we learned nothing in the decades that have passed since the civil rights movement?  Investigate the case and supply the truthful answers as to what happened, transparency, period, end of story.

Unfortunately, there are still many unanswered questions.  Did Brown have his hands up when he was shot?  Was he running away?  Was there a scuffle in the police car?  If Police Officer Darren Wilson was the only shooter, why would he have shot Brown 6 times?  Did he empty his sidearm or did he fire only six shots hitting him each time?  You don’t have to be a supporter of either side to ask the question that if Brown wasn’t firing back, why the excessive number of gunshots?  There were reports that Brown had committed a robbery prior to his altercation with police officers.  Was he a suspect or did he happen to be in the wrong place at the wrong time?   Perhaps he was fighting with or trying to run from police.  Then police have the right to use the force necessary to stop him.  But was deadly force necessary?  Police officer Wilson will have to prove that he used deadly force because he believed his life was in danger.  Until these questions are answered, no one should draw any conclusions.