Isis Needs To Be Eliminated Quickly And Decisively 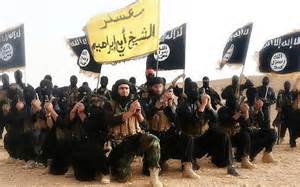 While the world is giving credence and doing little to end this silly terrorist group called Isis, it’s continuing to grow and spread fear in the middle east and throughout the world.  It’s time to end it once and for all, Decisively!  This group has already been given too much attention and the President of the United States needs to finally stand up and declare that Isis will be finished off.  What most people don’t realize is that the U.S. has weapons that are far more deadly and effective than what we have been using thus far.  A few missiles and bombings won’t be enough to finish off this pesky group of insects.  It will take far more devastation than that.  We must Overwhelm them!!  Breaking the backs and the minds of the enemy is the way any and all battles are won.

I understand that most people don’t have the ability to comprehend this and don’t agree with such a policy.   But cancer, if not caught and dealt with quickly, usually ends in fatality.  It has been reported over and over again that we can’t win without ground troops.  I disagree.  If we essentially destroy everything, there will be no place to hide.  Will innocents be caught in the crossfire?  Absolutely!  But I believe there are few innocents in this matter.  If there are, where are they?  Of course it would be preferable to let the locals deal with this festering boil.  But if they can’t or choose not to, others must do it for them.  This is not Viet Nam.  There are no jungles and places to hide other than bunkers or homes but they can’t hide indefinitely.  This is the hot, dead and desolate desert.  There food and water supply is finite.

It’s time for the west, particularly the United States of America to lay down the law and state, “if you surrender now, perhaps you will be spared.  If not, we will lay waste to Everything.”  There will be no reason to fight and nothing to fight for because there will be NOTHING left!!  It may not be nice and it’s certainly not a liberal way of thinking but we can’t wait until there is no other option.  Why is it that so few learn anything from history?  This must end now!