Whether or not you’re a fan of Hillary Clinton, it can not be denied that she has made history as the first woman 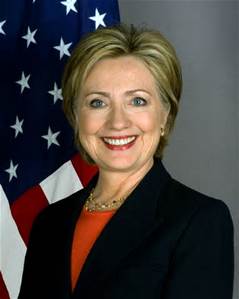 candidate for President of the United States.  I am once again extraordinarily proud to be an American despite the fact that many other countries including England, Germany, Argentina, India, and Israel beat us to this moment.  And I’m proud despite the fact that I’m not particularly a fan of the former Secretary of State and First Lady.  But the moment and the office is far greater than the individual.  It’s about telling the world that despite the fact more countries than not, have little respect for women’s rights, there is the distinct possibility that a woman, in charge of the nuclear launch codes, will be at the helm of the most powerful country to ever exist on this planet.

I love that more than I could ever explain.  After all, I’m a proponent of arming women across the world so that they can at last have the means to defend themselves against the clearly inferior men who use sex and violence to violate them and keep them under control.  If this world is survive and thrive, women must assume their rightful place alongside men as their equals. Equals in every way.

For too long women have taken a back seat to men for no other reason than the fact that men have been in control over power and the resources.  There have been too many men willing to kill and maim in order to hold onto their power.  Just 95 short years ago, women couldn’t vote in this country.  And now, there’s the real possibility that Hillary Rodham Clinton will be the first Woman President of these United States.

No doubt Hillary Clinton is a polarizing figure.  The Clinton’s have been involved in politics for a long time.  A political dynasty perhaps, so it’s inevitable that there will be some baggage and skeletons in the closet. Politics is a dirty game and is one of the reasons it doesn’t attract better, more qualified candidates.  What decent, intelligent person would subject themselves and their families to the scrutiny of the media and the American public?  It’s all about power and ego and anyone who denies that is not being forthright.  Of course politicians, including Hillary want to make the country better or at least that’s their intentions but the desire to hold the highest position, in the world, says something about them.

In the end however, I care little about her motives.  Despite what I think of her or anyone else thinks of her, she is clearly qualified for the position of President of the Unites States.  Far more qualified than either our current President or Donald Trump.  Should she win in November, she will make history and will once again show the world the greatness of the of the most important political experiment in the history of this planet.