Nuclear Option: It’s Time For the Democrats to Negotiate 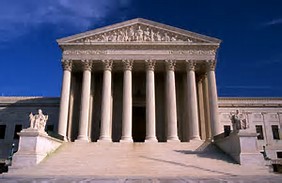 The nuclear option is not a big deal unless you believe wholeheartedly in precedent and history.  But the times they are a changin’.  The world has already been transformed in ways that our forefathers could never have imagined and just because sixty has always been the threshold for Supreme Court nominees doesn’t mean it needs to remain the threshold.  To be clear, the Democratic Party was first to use the nuclear option in order to get President Obama’s appointees approved. Those appointees included judges other than those nominated for the Supreme Court.  That was the one area, they felt should remain untouched. Depending on where you sit, will determine whether you think that’s nonsense or a completely rational decision.

Justice Anthony Kennedy and Justice Ruth Bader Ginsburg are both in their eighties, that could mean that President Trump could be appointing two more Supreme Court Justices which would tilt the Court far to the right. It is my belief that the Democratic Party, despite their continued anger at the lack of a hearing for Justice Merrick Garland, is making a gross miscalculation.

Justice Neil Gorsuch is arguably one of the most qualified Justices to be nominated to the U.S, Supreme Court in the history of this country.  I might even call him brilliant if one just looks at his educational background.  I don’t happen to agree with his views as a far right conservative but if that was to become the litmus test for every Supreme Court Justice nominee going forward, there would be no Supreme Court.  Justice Gorsuch, who will be confirmed one way or the other, will simply replace one conservative Justice, (Antonin Scalia) with another conservative.  It will not change the makeup of the Court.  The battle should have been if President Trump does get another pick or two to the Court.  Democrats could have made a valid argument that we can’t stack the court with one side or the other because historically the Court always been somewhat balanced.  Now, there is absolutely no chance of that happening.

If the Democrats in the Senate were smart, they would negotiate with the Republicans and end their filibuster. Perhaps it will be seen as weakness by the base but they are in a precarious position as the party that has lost all three branches of government.  I know that’s a radical decision in these tumultuous times but it’s the only way that there can be compromise moving forward.  Since Justice Gorsuch has a lock on the nomination, that battle is over. It’s time for both parties to come to the table and discuss how we can save our great institutions from complete and total partisanship, which is the largest issue here. If we continue down that road, the only losers will be the American people.